Nord-Lock Group Insights The Experts: The benefits of bolt shanks

The benefits of bolt shanks

What is a bolt shank and what are the benefits and advantages of this solution? 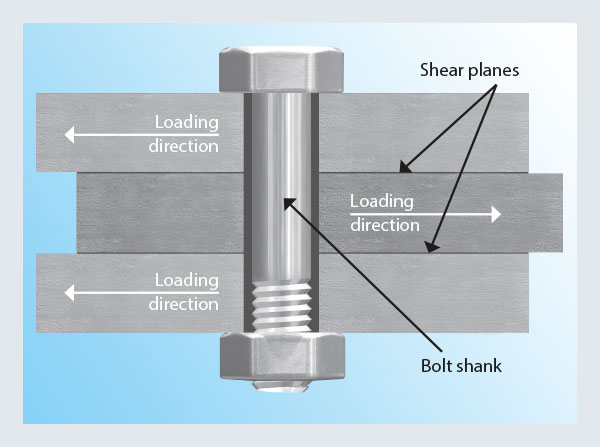 The shank is the threadless part of the bolt between the head and thread. There are two main ways of using the shank of the bolt. One is to make the shank increase the shearing capacity. The other way is to reduce the shank to increase the elastic resilience of the joint.

Under shear load (see the illustration), the bolt experiences force perpendicular to its axis. Shanks with larger areas and the absence of stress concentration points increase the bolt’s performance in shear loading. For this reason, designers should ensure that the shear plane is across the shank, not the threads.

When bolts are being used as tension bolts, they should be more elastic than the joint members. In high-performance bolts, shanks could be reduced to the minimum tensile area to compensate for the increase in rigidity due to its high ­level of hardness, ensuring a relatively elastic bolt. In cases where bolts failed due to cyclic bending, such as eccentric loading, replacing the original bolt with a waisted shank bolt could improve the joint performance. Due to its smaller dia­meter, the waisted shank would result in lower fatigue stress under the same bending condition, thus increasing the life of the joint. This is a typical scenario of how improving joint design could reduce maintenance and repair costs – something that many might overlook.

There are also other benefits. For example, where a long bolt is required, leaving the shank unthreaded can reduce both manufacturing time and cost. This could be an important factor in mass production of bolts.

How to Optimize a Bolted Joint Through Clamped Length? Clamped length is the free length of a bolt that is stretched under tension. Find out what is the optimal bolt length that you should consider. Read More
Can I use Nord-Lock stainless steel washers with steel bolts? When designing a bolted joint, there are several aspects to consider. Find out what to take note of materials to use for parts of the joint. Read More
What Is Material Fatigue? Material fatigue occurs when a component is subjected to cyclic loading. What is the fatigue phenomena in bolted connections? Read More
The Importance of Temperature in Bolting What is the most common temperature range for bolts, and what are the consequences of exceeding it? Read More
The Experts: Getting the most out of fasteners Before you re-use bolts, you should always consider the security level of the assembly and economic factors. Read More
The Experts: Picking up the slack Why is slackening becoming an increasing problem? Read More