Nord-Lock Group Insights The Experts: Getting the most out of fasteners

The Experts: Getting the most out of fasteners

Can I re-use bolts?

Before you re-use bolts, you should always consider the security level of the assembly and economic factors. Operators often lack important information, such as if the assembly working load or working temperature have been exceeded. As fatigue cracks are difficult to detect, the use of a new bolt (screw, nut and washer) is often recommended for security and legal reasons.

You can re-use bolts: 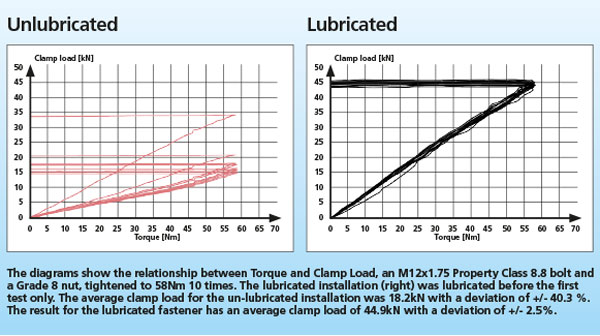 Before re-using threaded fasteners, always make a visual inspection of the head and/or nut for signs of damage or corrosion. Check that the coating on coated fasteners is not damaged or worn away. Ensure that there is no permanent deformation of the threads by running a new nut over the thread engagement length of the screw. Inspect the fastener shank for signs of reduction in diameter “waisting”, indicating that the yield strength of the fastener has been exceeded.

Clean the internal and external threads and all contact areas. Using the same or similar tightening condition as on the initial installation – such as torque level, tool class or lubricant type – ensures that the same clamp load is achieved.

If the fastener is initially assembled un-lubricated, the surfaces of the bearing area and threads will degrade under pressure when untightening, increasing the coefficient of friction between these surfaces. Tightening on re-use to the initial torque value will result in a reduced clamp load, because of the higher coefficient of friction of these surfaces. Subsequent re-use will progressively reduce the clamp load and then be consistent at a low preload and a lot of problems could take place, such as fatigue, vibration or joint separation.

Best Way to Improve Fatigue Resistance of a Bolted Joint The fatigue capacity of a bolted joint is very small, as compared to its static capacity. To improve fatigues resistance, we look into ways to reduce alternating stresses at the threads. Read More
How to Optimize a Bolted Joint Through Clamped Length? Clamped length is the free length of a bolt that is stretched under tension. Find out what is the optimal bolt length that you should consider. Read More
Preventing galling and seizing in bolting Galling is caused by a combination of friction and adhesion between metallic surfaces during sliding. In extreme cases galling leads to seizing. Read More
Effects of Lubrication When Reusing Fasteners By lubricating the fastener before every use, not only can friction be reduced to improve torque-to-load ratio, friction scatter can also be reduced to improve preload accuracy. Read More
What Is Material Fatigue? Material fatigue occurs when a component is subjected to cyclic loading. What is the fatigue phenomena in bolted connections? Read More