What is the notch effect and how does it affect bolts? 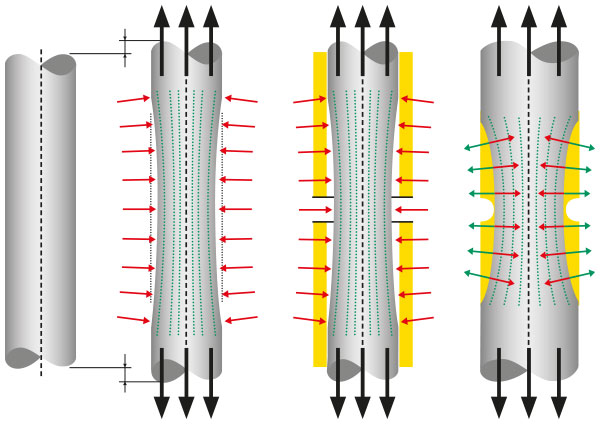 A notch is basically each change of the cross-section of a component. It may come from drill holes, grooves or cross-sectional variations. Notches result in uneven stress distribution, leading to stress peaks – known as the notch effect. The notch effect reduces the loading capacity, which makes it a crucial parameter when calculating the mechanical strength of components or constructions. It especially appears when the component is under tensile, compressive, bending, shearing or torsional stress. The notch effect – or the stress peaks – can lead to early failure, so it is normally considered a negative impact. A solution is to design the component sufficiently large.

But notches are not all bad. They can be designed to strengthen a component, for example strain hardening at the bottom of a thread, or to create a predetermined breaking point.

Bolts under tensile stress have local stress peaks due to their notch effects. The tensile breaking stress, especially of ductile material, can be up to 20 percent higher than that of un-notched round bars, due to the prevention of lateral contraction.

Besides tensile stress, bolts are normally also under repeated loads, which is important for their loading capacity. The notches generate high notch stress, which are again the reason why bolts can’t transfer vibrational loading. It could even lead to fatigue fracture of the bolt.

Best Way to Improve Fatigue Resistance of a Bolted Joint The fatigue capacity of a bolted joint is very small, as compared to its static capacity. To improve fatigues resistance, we look into ways to reduce alternating stresses at the threads. Read More
What Is Material Fatigue? Material fatigue occurs when a component is subjected to cyclic loading. What is the fatigue phenomena in bolted connections? Read More
Preventing galling and seizing in bolting Galling is caused by a combination of friction and adhesion between metallic surfaces during sliding. In extreme cases galling leads to seizing. Read More
The Experts: Picking up the slack Why is slackening becoming an increasing problem? Read More
How Do I Take Torsion into Consideration When Tightening?  How do I take torsion into consideration when tightening a bolted joint? Read More
The Experts: Can I yield my bolt by over-tightening? Do I risk yielding my bolt, due to over-tightening, when using Nord-Lock wedge-locking solutions? Read More