In a sweltering limestone quarry flanked by sheer cliffs rising 60 meters, a truck stands idling at the top of a near-vertical muddy incline. This hill is so steep that a daring skier would think twice before tackling it, but the driver edges forward and expertly guides his 13-tonne vehicle in a controlled skid towards a gate below that is only just wider than the truck itself.

The sport is truck trial, and the driver is Marcel Schoch, reigning European champion and star driver of the HS Schoch team. The German team has helped Nord-Lock test its wheel nuts, which are fitted to all eight wheels of this monster vehicle. “When you’re driving down hills like this, it’s good to know that your wheels are safe,” says Schoch, a 29-year-old who is in his fourth season in the competition. “We’ve been in some pretty tough situations but we haven’t had any wheels come loose since we fitted Nord-Lock wheel nuts.”

The extreme terrain of truck trial is an ideal proving ground for the wheel nuts. When not sliding down impossibly steep hills or powering back up them, the trucks buck, bolt and lurch around the course, with the chassis twisting and the axles taking a hammering. Bolted caught up with the HS Schoch truck trial team at their home event near Crailsheim, northeast of Stuttgart. Marcel Schoch has high hopes of retaining his title after winning the first round in Lyon, France – although this round, the second of the season, was hampered by a broken spring in the first run.

Truck trial is the art of moving heavy vehicles with high precision over the most challenging of terrain. Speeds are minimal, as is the distance travelled; Marcel Schoch’s truck is now in its sixth season but still has only 3,000 km on the clock. The sport demands nerve, patience, driving skill and a keen understanding of the way the soft terrain behaves when in contact with the vehicle’s weight. Anyone who has difficulty parking their car outside the supermarket need not apply.

Penalty points are accumulated for infringements such as knocking over a gate, missing a gate, or carrying out more than six forwards or backwards manoeuvres between gates. The winner at the end of the competition is the driver with the fewest penalties.

“We walk the course beforehand and come up with a plan,” says Schoch. “But it doesn’t always go as you would like, so we have a Plan B, Plan C and Plan D too.”

Besides the Nord-Lock wheel nuts, Schoch’s MAN truck also has Nord-Lock washers fitted at key points around the chassis. “The trucks must be very flexible to tackle this terrain, and in the past we have had a lot of problems with bolts coming loose,” he says. “This doesn’t happen anymore. It gives a good feeling and that’s why I like Nord-Lock products – because of the security they create.” 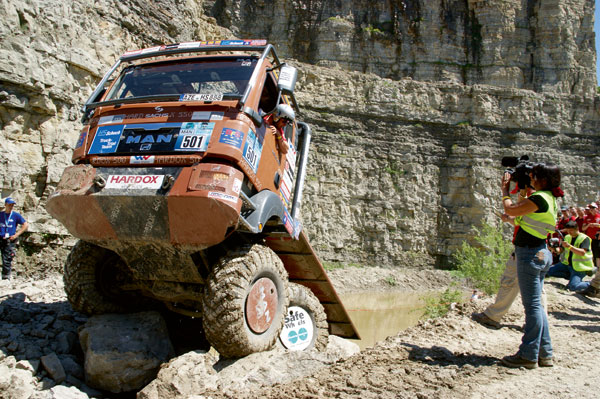 Putting the X-series to the test The Challenge Wam Metals is a manufacturer and supplier of a wide range of specialized non-ferrous and ferrous components, servicing both the local South African and the international markets. The... Read More
The Mercedes connection Hybrid vehicles use combustion engines and electric motors in parallel. High-voltage supply systems in these new vehicles place considerable demands on the connectors which provide the interface between the battery and the electronics. Read More