Taking on the ice 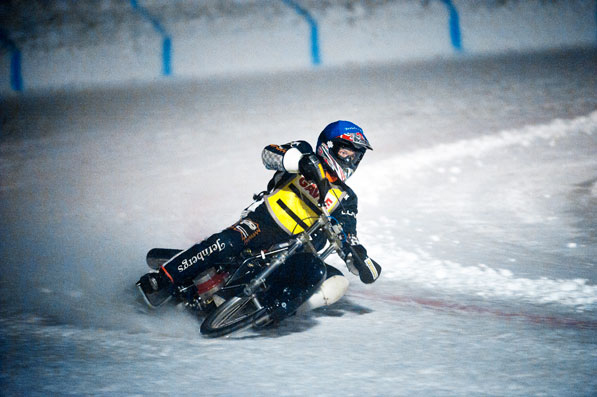 Invented in Sweden in the 1930s, ice racing is a motor sport unlike any other. Equipped with tyres covered with 28 mm spikes, the racer accelerates from zero to 100 kilometres per hour in less than three seconds. The bikes have front and rear suspension in order to cope with the extreme vibrations caused by up to ten centimetres deep ice furrows that occur on the track after only a few heats. But the bolts still tend to shake loose during racing, a problem that is aggravated by the 500 cubic centimetre engine mounted directly onto the frame, and the temperature fluctuation of the bike’s steel frame – it expands when the motorcycle gets warmed up for a race, and contracts when it cools down again, which makes the bolts loosen.

“Normally, only five percent of ice racing is about actual racing, whereas 95 percent is about checking and repairing the bike between heats and before and after a race,” explains Patrik Ahlin, who entered the Swedish top division league of ice racing for the first time this season.

With a background as a maintenance technician at a large steel company, Ahlin was quite familiar with Nord-Lock’s products. Therefore, while preparing his first ice racing bike, he secured all the bolted joints along the bike’s frame with a total of 20 Nord-Lock wedge locking washers with both standard and en­larged external diameters.

Already after the first race, the Nord-Lock washers proved that they could cope with the racing bike's frame expanding and con­tracting due to temperature differences. Instead of breaking, cracking or loosening, they moved with the materials and kept the bolts locked. Since the washers secured the bolts safely, the mechanic team saved time by not needing to check them – a saving of up to 30 per cent between the heats and as much as 40 per cent after a race.

With 22 races, Ahlin has driven the highest number of heats of all ice racers this season with­out any mechanical problems. Most important of all: he feels safe on the ice.

“When I’m racing, I don’t have time to worry about the bolted joints,” he says. “With the new washers, I go out there and concentrate on the race, knowing that the bike is in the safest possible shape.”

A formula for success A key piece of equipment in any pit stop is the pneumatic impact wrench, or wheel gun, which is relied on to loosen the large nut holding on each wheel and then screw on a new wheel – all in the blink of an eye. Read More
The Mercedes connection Hybrid vehicles use combustion engines and electric motors in parallel. High-voltage supply systems in these new vehicles place considerable demands on the connectors which provide the interface between the battery and the electronics. Read More
Ravishing and reliable Since 1978, Donkervoort Automobielen has been hand-building bespoke sports cars for true motoring enthusiasts. The Dutch family-run company’s stunning vehicles are sought after for their light weight, performance and exclusivity – only about 40 to 50 are made each year – and their track pedigree is well proven: last year a Donkervoort D8 GT won its class at the prestigious 24 hours of Dubai endurance race. Read More
Competing in the world’s most dangerous race In January 2013, the legendary Dakar Rally started in Peru for the first time and end in Chile, having crossed the Andes into Argentina. Read More
Rallying for safe bolted joints Motor sports are not easy on the cars. High speed, torque, vibrations, g-forces and hard knocks put enormous strain on the cars and their components. Read More