Competing in the world’s most dangerous race

In January 2013, the legendary Dakar Rally started in Peru for the first time and end in Chile, having crossed the Andes into Argentina. The rally has resulted in numerous deaths over the last 34 years and is known to be more about competing with the harsh environment than with the other contestants. Participating for the fifth time in the motorcycle class, Swede ­Thomas Berglund aimed to put the 8,000 km route behind him as one of the top 10 drivers. Bolted had a chat with Thomas before the start of the rally.

Why is the Dakar rally considered to be so dangerous?

“We drive up to 900 km every day for a total of two weeks in some of the world’s most extreme off-road terrain. In temperatures of up to 50°C, we cross deserts that shift from huge sand dunes to camel grass, as well as mountainous areas with stretches of sharp, loose rocks. More than half of the contestants are forced to quit because of injury or mechanical problems.”

What is the biggest mechanical challenge?

“Many unexpected problems can occur. Last year, the petrol boiled in my tank and the bike just wouldn’t run. But the biggest problem is the vibrations. A Dakar rally motorcycle has to be customised with a lot of additional equipment mounted on the chassis. Most important is the navigation tower in front of the bike containing road book, GPS, compass, double trip meter, antennas and other electronics. The navigation tower weighs 8kg and is mounted on the bike’s steering head, which has a very small mounting surface. It is common for the bolts to loosen due to the extreme vibrations and the whole navigation tower can fall off. It happened once in 2012 and in 2011 the whole handle­bar came loose twice.”

Is it not possible to retighten the bolts during the race?

“The real check is made by my service team during the nighttime break. When I’m out on the track in the middle of the desert, I’m on my own with just a few tools for an emergency repair. I don’t have any extra washers with me and retightening bolts takes too much time. Since I’m on the road for up to 12 hours every day, I need to rely on the bolts not loosening.”

Have you found a solution to this problem?

“For the 2013 rally, I secured all the bolted joints of the additional equipment mounted on my bike with Nord-Lock X-series washers. I chose these because they offer the highest security on the market. One of their biggest strengths is that they also lock the bolts against soft materials like aluminum and plastic, which tend to move and change shape during a race.”

What outcome do you expect?

“What I have been dreaming about for the past few years is a Dakar rally where everything simply works as it is supposed to. The two biggest changes in 2013 are the new bolt security and a new tank system. I hope these will prevent problems and give me the flow that I have been waiting for since my Dakar rally back in 2007.”

Update: During the editing of the magazine Thomas had to withdraw at the 12th stage of the rally. 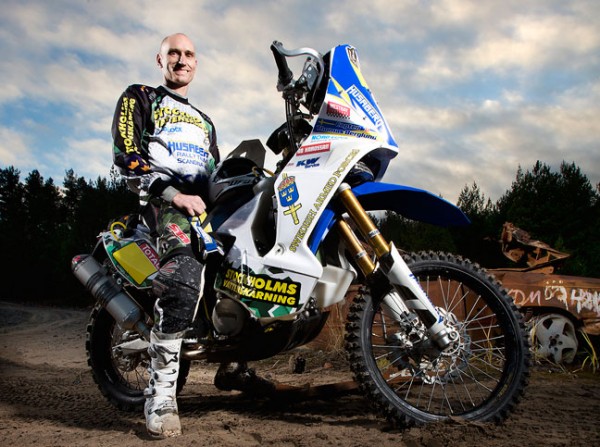 FACTS: THOMAS BERGLUND
Role: Dakar Rally Contestant for the fifth time.
Background: Has been with the Swedish army since completing his military service. Today, he is captain of the Life Guards, a combined cavalry/infantry regiment with responsibility for training. Practices amphibious running to stay in shape for Dakar.
Lives in: Vallentuna, Sweden.

Ravishing and reliable Since 1978, Donkervoort Automobielen has been hand-building bespoke sports cars for true motoring enthusiasts. The Dutch family-run company’s stunning vehicles are sought after for their light weight, performance and exclusivity – only about 40 to 50 are made each year – and their track pedigree is well proven: last year a Donkervoort D8 GT won its class at the prestigious 24 hours of Dubai endurance race. Read More
Taking on the ice Invented in Sweden in the 1930s, ice racing is a motor sport unlike any other. The bikes have front and rear suspension in order to cope with the extreme vibrations caused by up to ten centimetres deep ice furrows that occur on the track after only a few heats. Read More
Tough trial puts wheel nuts to the test “We’ve been in some pretty tough situations but we haven’t had any wheels come loose since we fitted Nord-Lock wheel nuts.” - proven at the European truck trial Read More
Taking the shock out of EVS EVTV Motor Verks in Cape Girardeau, Missouri, which sells motors, batteries and other components to enthusiasts around the world, has found a simple solution to this issue. By using Nord-Lock SP washers on the braided straps that link one cell to the next, these connections are secured. Read More
A formula for success A key piece of equipment in any pit stop is the pneumatic impact wrench, or wheel gun, which is relied on to loosen the large nut holding on each wheel and then screw on a new wheel – all in the blink of an eye. Read More
Built for Speed The latest version of Japan Railway’s famous Shinkansen, known around the world as the Bullet Train, reaches speeds of 300 kilometres per hour. Read More