It seemed like an impossible task. Build an offshore gas platform that was strong and stable enough to withstand the elements in the middle of the North Sea, yet flexible enough that it can still be dismantled and relocated. Using Superbolt assemblies almost six-metres long, Heerema Fabrication Group achieved a world first.

The F3-FA gas platform is located in the Dutch sector of the North Sea, around 240 km from the Netherlands. On the surface, it looks like any other offshore oil and gas platform – but it boasts one important difference. Unlike all other platforms, when the gas field runs dry, the platform doesn’t need to be decommissioned. It will simply be packed up, moved to another location and continue production. 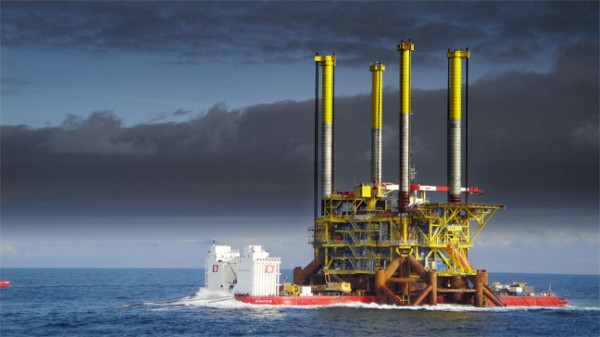 Never before has a self-installing platform of this size and magnitude been constructed in water this deep. The entire structure, including topside, four suction piles and legs, reaches a total height of 133 metres and weighs over 8,800 tonnes. It’s installed far out to sea, in deep water where it will be subjected to strong winds and high waves.

Heerema Fabrication Group (HFG), the company commissioned to build the platform, e­stimates that over one million man hours have gone into the project. The result is an incredible feat of engineering, and something that is set to change the whole offshore oil and gas industry.

Gas was first discovered at the F3-FA field of the North Sea in the early 1970s, but has been left untouched until now as the gas deposits are too small to justify building a permanent platform. The industry’s current economic model dictates that the value of deposits in any given field must exceed the cost of erecting an offshore rig.

However, since the new reusable platform can service multiple fields in its lifetime, it will change the whole industry and the ramifications are huge. All of a sudden, its now economically viable to tap into the world’s smaller reservoirs of oil and gas.

The project started in 2009 when HFG was originally commissioned to build a SIP (Self-­installing platform) – an offshore platform that can be installed without the need of a crane vessel and heavy pile-driving equipment. Similar SIPs had been used before, however only for smaller platforms in shallower, calmer seas. The new installation needed to support a much heavier platform, in much harsher conditions. On top of all that, it also needed the ability to be dismantled and relocated.

So how did HFG solve this seemingly impossible task? Their solution was to use the simplest and oldest fastener in human engineering history – bolts. Supplied by the Nord-Lock Group, the bolts are 5.5 metres long, 24 cm in diameter and weigh over 2,000 kg. Even the nut-style ­Superbolt tensioners used weigh over 350 kg.

“The Superbolt assemblies we supplied offer the same security as welding, except they are faster and easier to install,” says Franz Raymann, Service Manager, Nord-Lock Group. “We used a special sealed design, which protected the jackbolts in rough conditions. Each of the 36 jackbolts per Superbolt tensioner is individually sealed to protect it from the corrosion and conserve the lubricant. Thus, the jackbolt can be loosend without any damage and the entire connection can be reused.”

With a project of this magnitude having never been attempted before, Nord-Lock engineers were also able to assist the project team with testing, calculations and installation. Another advantage offered by Superbolt assemblies was the ability to check load and preload at anytime.

The entire platform, including legs, was constructed onshore and then transported out to sea via a flattop barge. On arrival at the F3-FA gas field, the legs were lowered to the seabed floor, where they were fixed to four suction piles. Using strain jacks, the platform was lifted off the barge and moved to the top of the legs. Once in position, it was fastened with sixteen Superbolt assemblies – four on each leg – preloaded to 12,000 kN each. When fastened, the strain jacks were removed, leaving the entire 4,000 tonne platform hanging on just 16 Superbolts.

Total installation time, from the time the barge arrived on location, took just two days and four hours – quite remarkable for a construction of this size. “Compared to any other fastening method, Superbolt is much quicker and easier,” adds Raymann. Speedy installation was also important as the barge was vulnerable to rough weather until the platform was secured.

“The use of Superbolts also ensures the installation process is reversible and repeatable. Bolts can be unfastened and reused, which is the essence of a re-locatable platform.”

For HFG, the Superbolts are a perfect solution. “Nord-Lock’s nicely designed Superbolts and the smart tensioning system made the innovative F3-FA platform possible,” claims Frank Slangen, the F3-FA project manager for HFG.

Currently the F3-FA platform is the only offshore platform of its kind, but the success of the whole project and the potential it offers means it won’t be long before more are built. With a proven bolting solution that has also shown it can meet the demands of such an application, Nord-Lock can expect to be called upon again.

No time for downtime Every year Nucor produces over 21 million tonnes of steel, making it the biggest steel producer in North America and one of the biggest in the world. Read More
Making deep sea drilling safer As the global industry looks for safer deep sea oil drilling solutions, MPO’s gas riser handling systems are in high demand. In just a few years, they’ve grown from a small office into a global supplier with over 200 employees. Read More
The wind turbine time machine With the sector growing globally every year, the wind energy industry is looking to use less material for producing big wind turbine parts. Read More
Improving steel mill safety and productivity The JFE Steel Corporation’s West Japan Works is one of the largest and most advanced steel mills in the world. Switching to Superbolt multi-jack tensioners has turned one of the riskiest maintenance tasks in the plant into one of the safest. Read More
Converting Sea Wave Motion Into Energy With oceans covering more than 70 per cent of the earth’s surface, wave power is potentially a huge untapped source of renewable energy. Read More