Nord-Lock Group Insights The blade sticks to the handle

The blade sticks to the handle 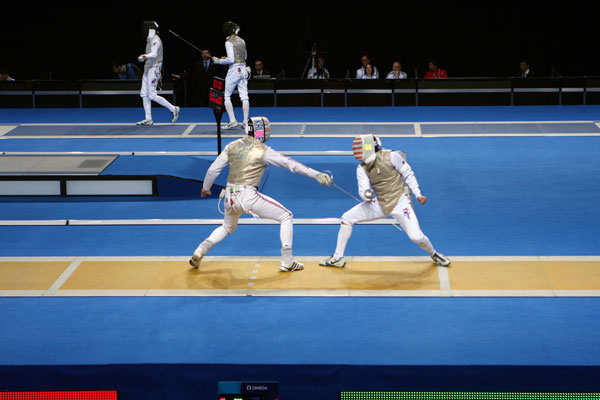 Fencing is a demanding sport, not only for the athletes but also on the equipment. In any competition a fencing sword is subjected to lots of movement and pressure, which can gradually loosen the connection between the blade and the handle.

As one of the UK’s leading manufacturers of fencing equipment, and the only one run by Olympic fencers, Leon Paul is continuously looking for ways of improving and developing its products.

Currently it supplies equipment to Olympic athletes, Olympic and other international competitions, including the 2012 London Olympic games, and even Hollywood films. Accordingly its products need to be of the highest quality, and loosening needs to be minimal.

After being introduced to Nord-Lock products, Leon Paul decided to trial its washers, which were used to secure the nut connecting the handle to the blade. The new swords were then distributed to members of the British Olympic fencing team to see how they would hold up in competition.

Each of the athletes returned to Leon Paul reporting a significant improvement, and that the blade no longer came loose. In light of such results, Leon Paul has since taken the decision to fit Nord-Lock washers in all its swords.

Right on target For over thirty years, Biathlon Target System Kurvinen has been a world-class pioneer in biathlon target and range systems and has exported its products to over 30 countries. During a competition, Kurvinen targets will be continuously shot at and subjected to thousands of hits. Read More
Advantage iDapt Tennis rackets are subject to huge amounts of stress. Ever-changing hitting angles, ball speed and forces lead to vibration, twisting, deformation and settling issues. Looking to upgrade the iDapt construction, Dunlop turned to Nord-Lock. Read More
Safety secures trust For more than 30 years, unsurpassed safety has been synonymous with the Nord-Lock Group. Read More
China: Opportunities on the coal market Xi’an Coal Mining Machinery has approved Nord-Lock washers and Superbolt tensioners as specialised components for its shearers and roadheaders. Read More
Focus on security in windy and vibrating environment Dutch company Akkadia manufactures specialist CCTV systems for demanding situations in various industries. Its cameras can be found everywhere, from offshore, to polar regions and deserts. Read More
Cheaper but Better Solution for Tractors With Washers Early in 2017, when Hattat Traktör was testing a new tractor model, they realized that the joints on the air compressor–engine connection bracket were loosening because of vibration. Read More