Towering challenge for a giant crane

Challenges are nothing new to Terex Tower Cranes, an Italian-based manufacturer of cranes for construction and industrial use founded (as Comedil S.r.l) in 1962. It has been a part of Terex Cranes since 1998, and sells its flat top, luffing jib, hammerhead, and self-erecting tower cranes all over the world.

Recently, with an eye to the growing demand for tall, powerful cranes at large construction sites in the global market, Terex Cranes developed a new luffing jib tower crane with a maximum jib length of 75 metres, capable of handling a 66 tonne load. It is the largest tower crane ever built by Terex.

What eventually became the CTL 1600-66 presented a unique challenge: designing the coupling between the tower and the jib. Eight M100 bolts were needed for assembly, and a standard solution would have called for the use of a hydraulic torque wrench of 90 kilos to tighten them. This in turn would have required two workers to perform the assembly and a separate mini-crane to ­handle the weighty wrench, all in very limited space at high altitude.

While the standard solution was feasible, it meant modification of the crane’s design. Engineers working on the project were loath to make such changes because they were satisfied with the original plan. Their challenge was to ensure that the high-altitude assembly of the tower would be easy and safe for operators without altering their design.

Nord-Lock is one of Terex’s suppliers, and suggested an alternative solution – Superbolt multi-jackbolt tensioners. The Superbolt CY-M 100X6/W ensured the technical performance sought by the design team without the need for modification. Only a small amount of space is necessary because tightening requires only one worker, who can tighten the bolts to the correct clamp load using a simple torque wrench, instead of the 90-kilo hydraulic version. 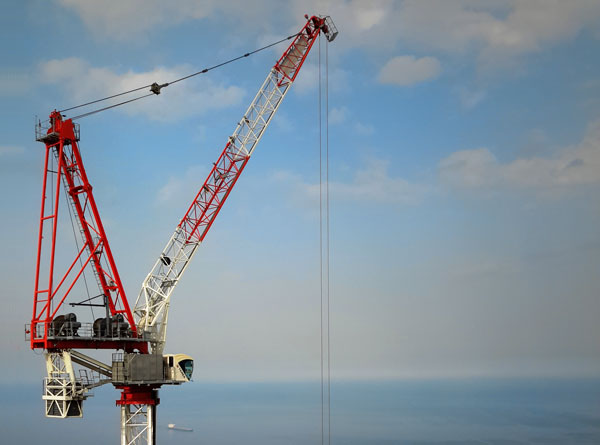 The overall speed of operation is about 40 minutes, the same as the standard solution. Although each bolt can be tightened faster, there are eight per unit. However, speed was not a deciding factor. More important for this kind of application – very large cranes with long extensions – are the advantages of manageability, reduced space, safety, and the need for one worker rather than two.

The CTL 1600-66 made its market debut in 2014, so it is still too soon to evaluate customer reaction. But Terex is optimistic about the long-term prospects for its giant crane.

Cranes The connection between the slewing ring and the portal requires very high precision during the tightening of the bolted connection. Kirow Ardelt meets these high demands by using Superbolt® tensioners. Read More
Drill with Skill When it comes to drills, size and horsepower are not everything. In small confined spaces or sensitive environments, it is more important to have equipment that is flexible and can drill with finesse. Read More
D2FC saves time and money through Nord-Lock D2FC, a French company that manufactures critical high pressure control valves for hydro-electric power plants, has decided to generalise the use of Nord-Lock washers. Read More
Opening up new fields It seemed like an impossible task. Build an offshore gas platform that was strong enough to withstand the North Sea, yet flexible enough that it could be dismantled and relocated Read More
No time for downtime Every year Nucor produces over 21 million tonnes of steel, making it the biggest steel producer in North America and one of the biggest in the world. Read More