Repairing a busy bridge without disrupting the infrastructure can be problematic. At the same time, you must ensure safety, both during the work process and for the long term. Maintaining the Emmerich Rhine Bridge proved a challenge.

Fondly nicknamed the ‘Golden Gate of the Rhine,’ the Emmerich Rhine Bridge crosses the river Rhine just a few kilometers from the Dutch border. The bridge is not only a national cultural protection site and the longest suspension bridge in Germany, but “it’s also one of its most beautiful bridges,” says Henning Uphoff, a design engineer with the technical consultancy Leonhardt, Andrä und Partner.

Connecting the cities of Emmerich am Rhein and Kleve, the bridge is a main crossing over the river, saving a detour of at least 50 kilometers. So, when a regular safety inspection in 2014 found that, among other things, bolts had come loose and the bridge had to be repaired, the top priority was to ensure that traffic could continue to flow. 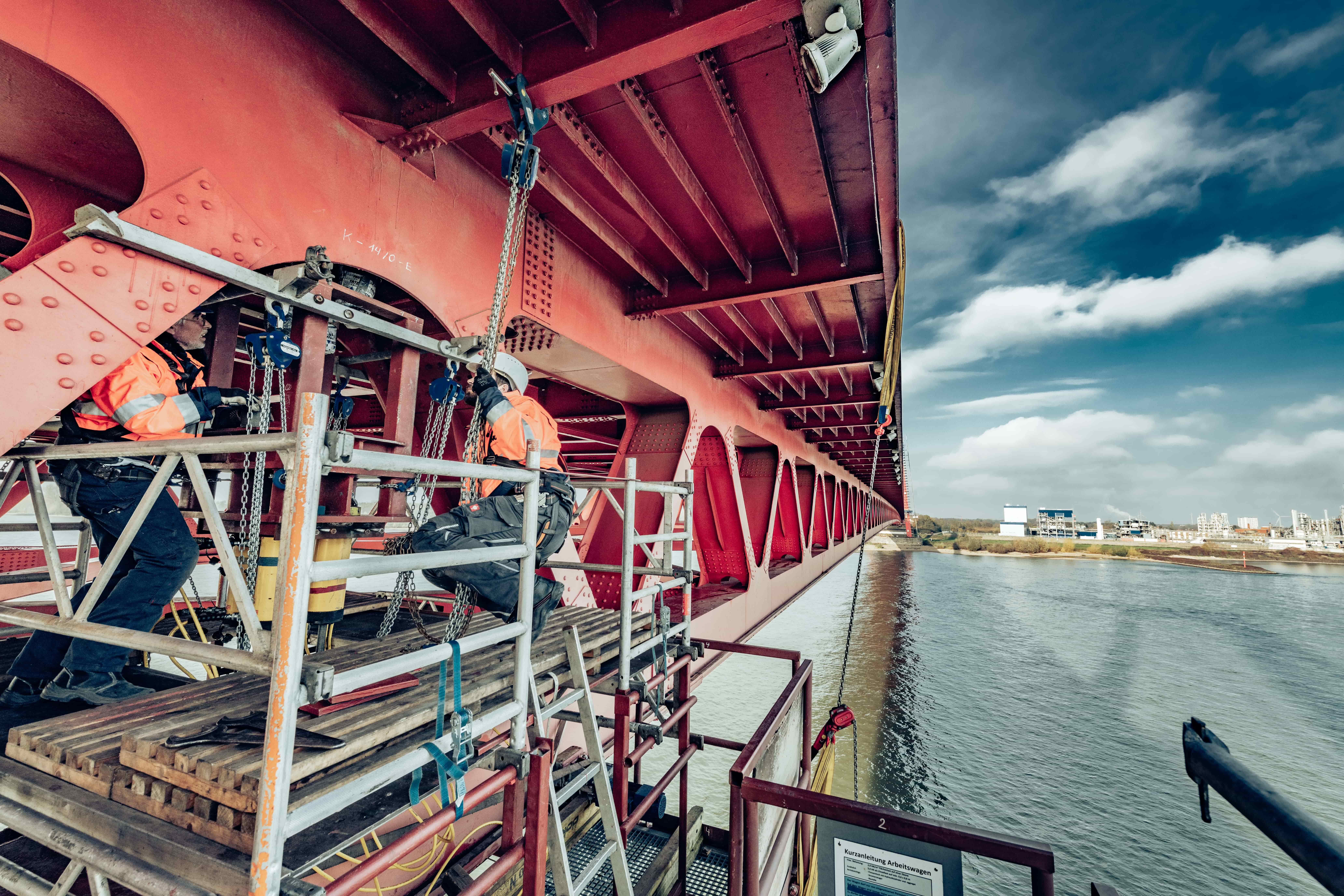 "This was the clear message from the regional road authority Landesbetrieb Strassenbau NRW,” remembers Uphoff.

Accordingly, everything about the planning was based upon the requirement that one road lane in each direction should remain open. At the same time, the 200 vertical suspenders attached to the suspension cables with cable clamps made of cast iron should progressively be taken down.

Uphoff, who studied Structural Engineering at the Ruhr University in Bochum and describes himself as a vivid bridge-lover, says:

One major challenge was to replace the cable clamp bolts. Due to the enormous load, there was no way to loosen the bolts with the suspenders attached to the main cables. But how can you take down up to 100-meter long suspenders weighing up to 1 ton without jeopardizing safety?

The original solution was to use a helicopter. “It’s definitely possible. But I could not envision myself high up on the bridge with the helicopter arriving with these long and heavy suspenders,” says Marcel Vecchi, general manager with the building company R. Lange GmbH.

Another potential problem, Vecchi says, was that strong winds and bad weather could cause delays of several weeks, with substantial financial implications.

Instead, Vecchi came up with an alternative solution. The company designed and built a roller conveyor adapted to the specifics of the bridge. With a diameter of 2.5 meters and a 180-degree bend, it was placed at the upper part of the suspension cable. These main cables, which are attached to two 77-meter high pylons, carry the whole bridge. Each cable consists of 61 separate cables, each with a diameter of 5 centimeters, which are forced together to form a hexagon.

The big challenge was to avoid damaging the suspenders by overbending, so a minimum bending radius had to be observed. The existing suspenders were taken down and replaced with new suspenders using the roller conveyor and several winches. The bolts had to be substituted on the ground due to the weight of the clamps. Some of the original bolts were slightly bent, others were corroded, and many had come loose.

These non-galvanized HV sets were replaced with new bolts and Nord-Lock Steel Construction washers, as prescribed in the tender.

“Safety was a priority, so we went with Nord-Lock washers,” says Uphoff.

Vecchi adds that, “This is a huge bridge with vibrations due to strong winds and traffic. So, there was really no alternative to Nord-Lock’s Steel Construction (SC) washers.”

In contrast to traditional bolted connections — where there is contact between the parts that are connected — there needed to be a distance between the two halves of the cable clamps. This was necessary to ensure that the preload was applied to the cables and cable clamps. Each clamp was tightened with 12 to 28 bolts.

Only half of the bolts were allowed to be removed at the same time to ensure that the clamps remained safely on the cable. “To guarantee safe and equal clamping, we made a plan for what bolt to be replaced in which order and how to preload them,” explains Vecchi.

“We started with the even bolts, removed them, renewed corrosion protection, replaced them with new bolts and the new washers and then we continued in the same way with the odd ones,” he says. “In the first step, the bolts were tightened manually. Then they were preloaded to 100 percent, with more preload on the inner bolts than on the outer ones.” 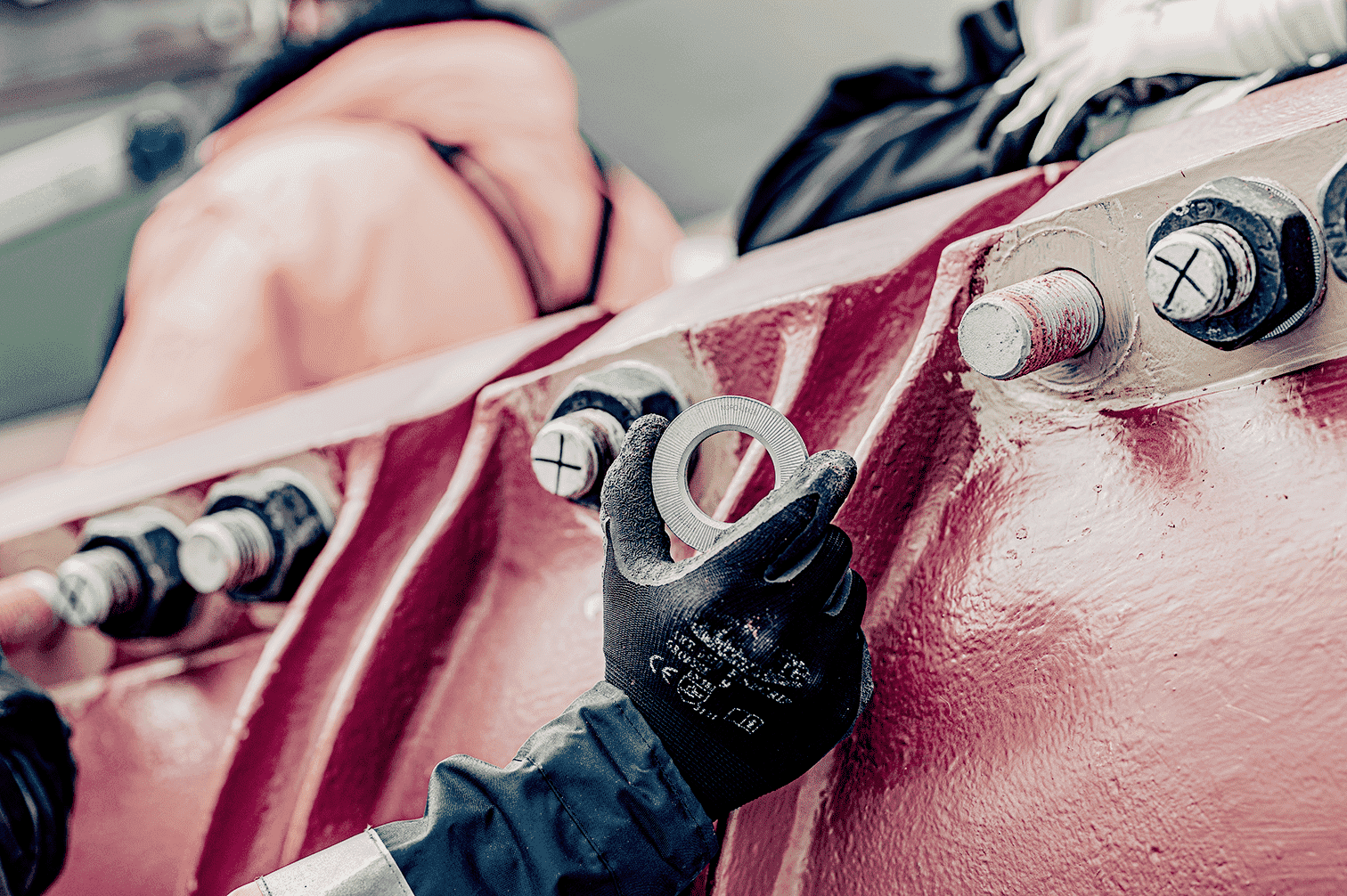 Completing a successful bridge repair for the long-term

Frank Götz, manager for buildings and infrastructure with Nord-Lock Group, says: “Nord-Lock has been approved for structural applications for almost 15 years. It all started with national technical approvals in Germany. In construction, everything takes time, especially innovations. It is therefore great to see that we have optimized our approvals bit by bit and extended the scope of applications. The good thing is that we are not at the end yet. We continue to improve our approvals to meet growing customer demands and provide more safety.”

In the meantime, Nord-Lock has two European Technical Assessments (ETA-19/0813 and ETA-20/0010) that cover both preloaded and non-preloaded structural bolted connections.

Frank adds: “It is always important to take a look at the approvals as these specify decisive criteria for assembly, such as an appropriate torque.” All in all, 2,200 bolts were replaced on the Emmerich Rhine Bridge, with Nord-Lock SC washers guaranteeing the highest standards of safety. “Now we are safe for the next half-century, at least,” says Uphoff.

Expander System pivot pins perfect for complex bridge design Custom Expander axles secure critical pivot joints, giving precision and reliability to raise/lower the Hisings Bridge in Sweden for ships to pass underneath. Read More
Rebuilding the Genoa bridge Safety is always the major consideration in bridge construction, but the circumstances of the Genoa project underscored its absolute priority for PERGENOVA. Suppliers and sub-contractors were chosen based on stellar credentials, but also competitive cost and speed of implementation. Read More
An innovative solution for a special bridge 140 meters in length, 45 meters wide and 3,400 metric tons heavy. And gold coloured. The new bridge in Stockholm is definitely set to be a new landmark in Sweden’s capital city. Read More