Why You Might Need to Rethink Your Bridge’s Joining Methods

Many European bridges are part of an aging infrastructure built during the mid-20th century. This calls for maintenance, as well as newer bridges that better correspond to rising traffic needs. History, regional preferences and bridge type are all key contextual factors that influence the joining methods used in bridge construction and maintenance.  The following text explores this topic in detail. It is an excerpt from the white paper Bridge Design, Construction & Maintenance: Insights and Best Practices for a Rapidly Changing Sector

There are many factors to consider when deciding whether to use welding or bolting to join bridge components together. In some instances, existing preferences may dictate this decision, however, it is important to consider each project separately in order to make the best decision.

A hard choice to make

Historically, bridges and other steel structures were riveted such as the Golden Gate Bridge. This process includes heat treating and forging the rivet after which it is cooled through a process called annealing. Individual rivets are not very strong, meaning that many must be used in order to assure the safety of a structure. It is also a cumbersome process and is no longer used within the bridge-building sector.

Therefore, although riveted bridges are no longer built, existing bridges that use rivets still need to be maintained. Bolts are often used to replace worn rivets and high-strength bolts in particular are specifically designed to resemble rivets. Welding is not a viable option to maintain the joints on old bridges due to the degradation of the bridge material, which would make it unsafe.

Bolting and welding are currently the two most popular methods to join components together. When it comes to which method to use, the decision can be as controversial and country specific as that of deciding between concrete and steel. It must also be noted that the welding qualification level in some countries is very high and this is an example of how national contexts play a role in the preferred construction methods.

Apart from the influence of national preference, there are a few important factors that can determine whether parts should be welded or bolted. One of these is the type of bridge that is being built — see infographic. 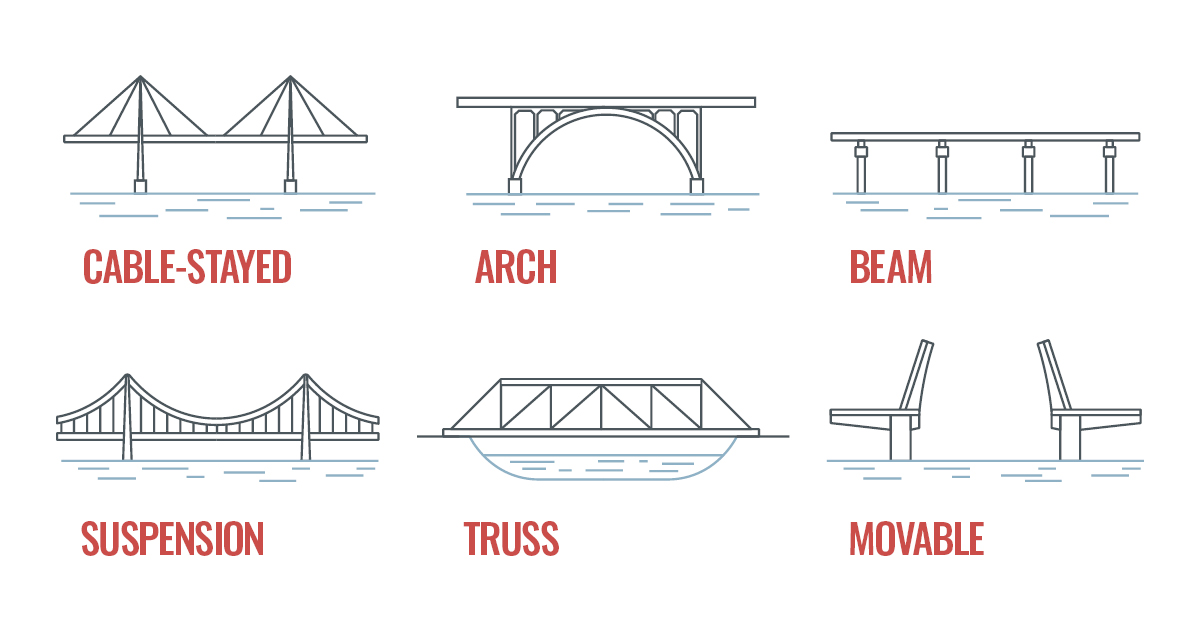 For larger bridges, hollow box cross-sections are often used as they absorb torsional stress very well and only the outside has to be considered when planning corrosion protection. The downside of hollow box cross-sections is that they can only be approached from one side, making it difficult to use a bolted connection. Thus, welding is the most logical method to use. Tolerance and offset compensation are also relevant for larger structures. There is no margin of error for bolted joints as the bolts must fit precisely in the pre-existing holes. Welding is much more flexible as you can compensate offsets if necessary.

Truss bridges, on the other hand, could very well be bolted due to their interlocking triangular sections. However, size must also be taken into account and small truss bridges could potentially be welded together in the production hall and transported as a whole to the construction site. Nevertheless, even if welding is the preferred connection method, bolted joints will still be widely used across the bridge. This is because secondary structures such as railings and noise walls are commonly bolted. These primary structures (e.g. cable clamps, bearings, transition joints structures) are also dynamically loaded to compensate for bridge movement.

Temporary bridges are almost exclusively bolted due to the fact that they are dismantled every few years and rebuilt elsewhere. Since bolting creates a temporary joint connection, these joints can be easily taken apart and the bolts and washers themselves reused. Since welding creates a permanent joint connection, it is very complicated, costly and time consuming to use it for a temporary bridge. A large amount of effort would have to be put into first creating the welds and then undoing them. In this way, bolting is a much more efficient and advantageous method to use.

Efficiency and ease of use

Efficiency and ease of use are also important factors to consider regarding welding or bolting. Included in this is the decision to make the connection at the factory or on site. Welding often requires a certified welder, advanced tooling and can be considered risky due to the high temperatures involved. Thus, it is quicker and easier to perform this task in a factory where everything is already set up. It is also cheaper to weld in a factory due to the high cost of setting up a welding and testing facility on site, which also contributes to longer bridge erection times.

Indeed, if the connections are to be made on site, bolting is often the easiest and most efficient method to use. This is due to the fact that bolting is a much more controlled operation and does not create any unnecessary risk in a construction environment. The components are also easy to transport and install as they do not require any special equipment to use. Most instances only necessitate a simple handheld torque wrench to operate. Bolting also has the added advantage of not being permanent, unlike welding, which means that unexpected problems are quicker, easier and cheaper to repair.