History of The Washer

Loosening or slackening have been intrinsic problems since the invention of nuts and bolts. So, while washers may not be the most glamorous mechanical innovation, they certainly play a critical role. Whether it’s to secure a 17th century wooden wagon wheel or an aerodynamic airplane wing, washers have been the go-to solution for securing bolted joints.

The concept of joining objects together is surely almost as old as humankind. It can’t have been long — relatively speaking — until someone joined maybe two sticks, or a stick and a rock together. Not only seeing the need to do so but finding a way to do it.

For thousands of years, presumably, various types of primitive strings and ropes, were the preferred solution in making tools and weapons as well as various constructions, such as primitive buildings and rafts. Neolithic man (roughly 9,000 BC to 5,000 BC) surely made the best of whatever materials were available during the so-called “New Stone Age”, likely including parts of plants and animals.

Later in our evolution, woodworking and joinery brought a broad range of ingenious joints. Glue and simple fasteners, such as dowels and nails, were critical developments. 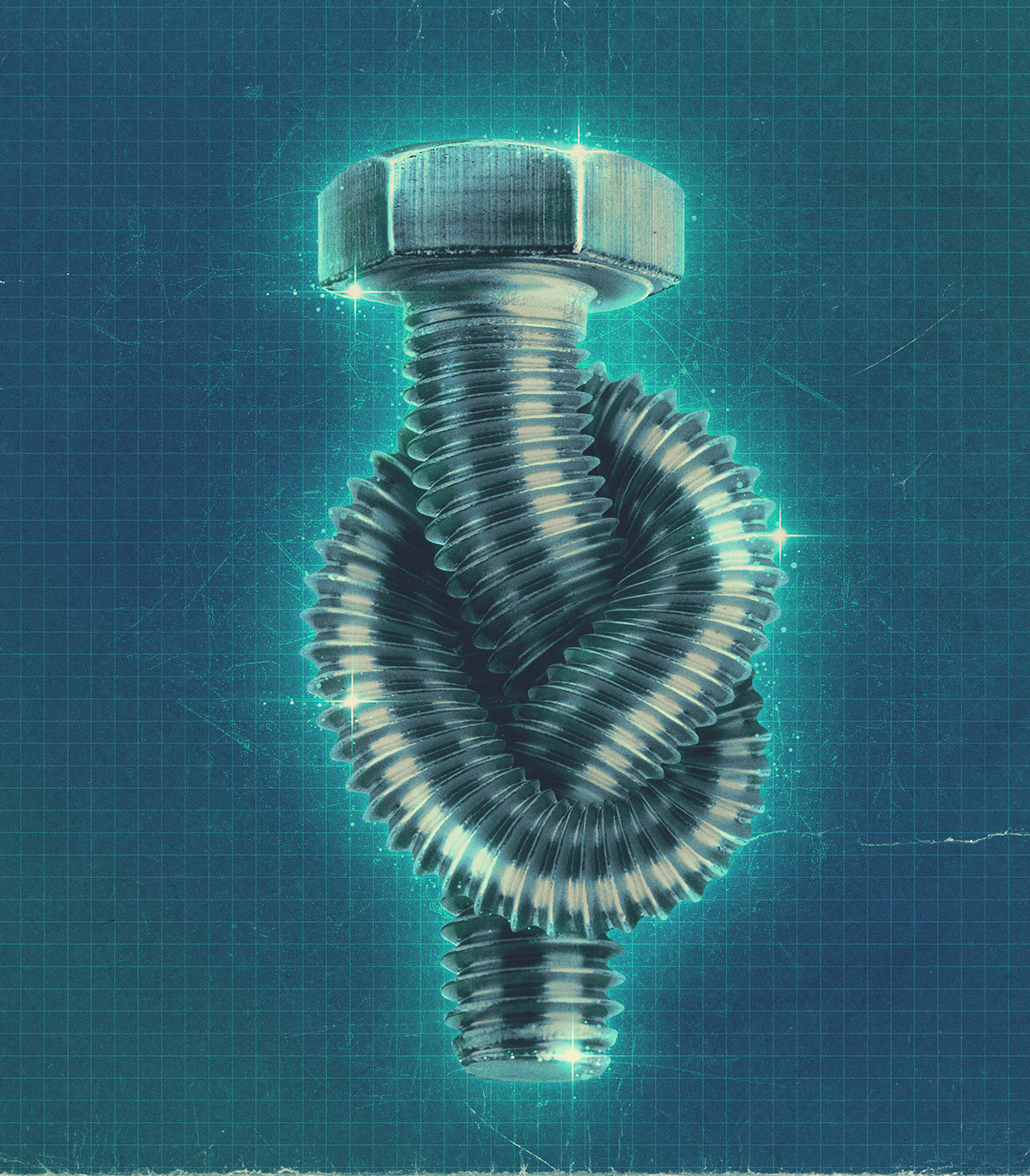 Tracing the first use of washers

The use and development of washers are closely intertwined with threaded steel bolts and bolted joints. However, it is anyone’s guess when an engineering forefather saw the advantage of adding some type of washer to a bolted or screw joint.

Although opinions differ, the invention of screw threads can probably be traced back to around 400 BC. The technique was, for example, used in presses. This invention opened for the development of the tapered screw, maybe by the Egyptians or the Romans, and set the stage for a revolution in woodworking joints and other fastening applications.

The threaded steel bolt with a matching nut probably dates to the 15th century. While thread-cutting machines had been in relatively wide use since the 17th century, it wasn’t until the first industrial revolution, starting in the mid-18th century, that things began to gather momentum. Development was driven by the opportunity to manufacture and use machines for mass production.

A washer for each use

The etymology of the word “washer” relating to bolted joints is also lost in the mists of time. However, the term is found in writing from 1346. Another source, from 1611, uses the word and describes the use: reducing wear on an axle hub in an artillery application.

Current uses of washers are a clue to the invention of them. Keeping bolts from loosening — which must have caused massive wheel problems back in the days of animal-drawn wagons — and reducing wear and tear were likely the primary uses. Other, modern uses, include distributing load over a larger area, acting as a spacer or locking device, reducing vibrations, and protecting against liquids.

Today, washers come in a huge number of variants, materials, surface treatments and coatings, and sizes – many catering to very specific applications. In general, they can be divided into three main groups:

Emergence of the most effective locking method

Of course, engineers have tried other methods than washers to prevent loosening and slackening of bolted joints, such as adhesives and various nut types. And when it comes to locking washers, lots of variants have been tried, including conical washers (Belleville), curved disc spring, wave washers, split washer/spring lock washers, toothed lock/serrated washers, tab washers, and wedge-locking washers.

Wedge-locking washers are regarded as the most effective to prevent bolt loosening. Patent applications date from the early 20th century, but it is fair to say that the breakthrough came when Nord-Lock started refining the design and commercializing them in the 1980s.

The history of Nord-Lock wedge-locking washers

After dealing in oil burners, hose reels, miter saws, and other tools since 1953, the Swedish company Nobex moved its production to Mattmar (some 600 kilometers northwest of Stockholm) in 1960. In 1982, they acquired the patent for wedge-locking washers and began manufacturing them under the Nord-Lock brand.

Kurt Persson, son of the company founders Bengt and Mary Persson, and for 26 years Nord-Lock’s CEO, played an active part in developing the wedge-locking washers. He picks up the story: “With the washer business on our hands, you might say that we jumped in at the deep end. We knew nothing about the production, such as pressing, hardening, and surface treatment.”

“We could see that the basic functionality was fantastic,” he continues. “But at the same time, the product that we had was a catastrophe with the wrong material and design. We learned this the hard way and had to scrap everything and literally go back to the drawing board.”

Nobex hired an engineer to redesign the wedge-locking washer and, with time, the company built up its in-house design and production skills. Persson says:

“Once we had perfected the basic wedge-locking functionality of the washer, the following developments and improvements dealt more with new materials, sizes, and surface treatments to resist corrosion, heat, and acidity.”

The focus since then has been on steady, continuous improvements and specialization. For Nobex, it was critical to improve the production technique and redesign their machines to secure high quality across large washer batches. In addition, in-depth testing was — and still is — essential to maintaining a high and even quality level.

In 1984, as the first supplier, Nobex could offer all-purpose stainless-steel wedge-locking washers, which Persson says “brought a big improvement in product robustness and corrosion resistance. Before the launch, the washers had gone through extensive salt-spray testing.”

A year later, the company started to offer wedge-locking washers glued together in pairs. This development not only ensured product quality but also simplified assembly for the customers.

Focus on robust production and expanding the range

New hardening and surface treatment lines were installed in Mattmar in 2007, leading to the introduction of Delta Protekt® coatings. Changes to the non-electrolytic applied coating enabled an increased hardness, improving the performance with high grade bolts.

Laser marking was added in 2011 to guarantee full traceability, followed by a major development of the Nord-Lock X-series washers, launched in 2012. This range combines the original wedge-locking technology with an innovative elastic effect. As a result, it significantly reduces the risk of spontaneous bolt loosening due to vibrations or slackening, such as in applications with short clamp length and multiple clamped parts gaskets, soft metals, plastic composites, coatings, or thermal cycling.

As of today, the Mattmar plant manufactures a range of hundreds of washers and can produce tailor-made customer specials. The focus has been on expanding capacity, continuously improving the core product and processes, and expanding the range even further by way of new washers and combi products.

In 2021, Nord-Lock Group celebrated the inauguration of a modernized and expanded production facility in Mattmar, built to ensure long-term production capacity amidst growing customer demand from all over the world.

The potential future of washers

Generally speaking, there are many interesting opportunities for remote preload monitoring of bolted connections, using sensor enabled smart technologies. Many already exist, such as Superbolt LST or Superbolt LSF, and are being used to monitor the most critical connections in industries such as rail and offshore wind.

However, Pierre Kellner, Business Developer Smart Products and Services at Nord-Lock Group, notes that most existing smart products within the bolting industry are monitoring elongation in the bolt or stud to measure preload. Some smart washers exist, but they’re not preferred because they require much more space than a traditional washer.

“Nord-Lock washers don’t measure preload, although the wedge-locking function is designed to eliminate any loss in preload over time,” says Pierre

He adds that “we have seen experimental uses of piezo electronic crystals on very thin washers, but on a commercial scale the more immediate opportunities from industry 4.0 are in production. There, you might improve the efficiency and quality of the washers’ production by investigating automated inspections, reducing waste, and improving speed with data integrated throughout the process.”

Wedge-locking washers use tension instead of friction to secure bolted joints. In each joint, there is a pair of lock washers with cams on one side and radial teeth on the other. The wedge-effect prevents spontaneous bolt loosening. The spring effect compensates for loss of preload due to slackening.

Read more about the technology