They didn’t think we could succeed

If not for the big barn next to his grandparent’s home in Halabacken in Jämtland, in Sweden’s northwest, this story would probably have been completely different. The rather humble business that started here 55 years ago, in the middle of the woods with a backdrop of snow-clad mountains some 40 kilometres from the nearest town, has evolved into an international industrial company. 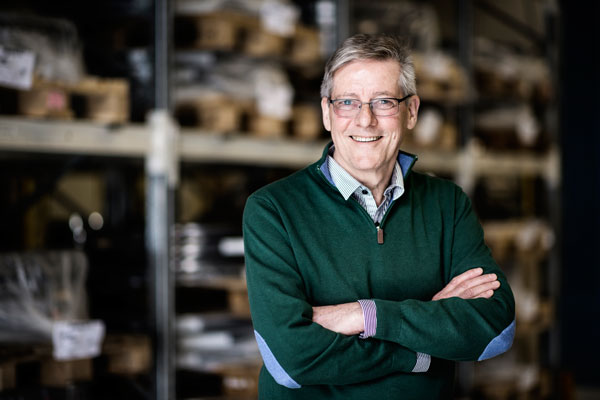 Kurt Persson has been with Nord-Lock (and its predecessor Nobex) for 50 years, and can these days be addressed as both Senior Advisor and senior citizen. He describes himself as a person who always looks forward and who never gives in.

“I finished school after nine years of compulsory schooling and since then it has been ‘learning by doing’.”

Nobex’ business sprang out of his father Bengt’s interest in technology. For a long period, the production focused on an innovative oil burner, which was later succeeded by mitre saws. These were produced until 2001. When Nobex acquired a company that produced locking washers in 1982, the seed was sown for Nord-Lock.

“For the first seven years of washer production we were in the red. We didn’t have a clue about what we were getting into. We have taken some pretty hard knocks, but have never doubted the longevity of the product.”

How did you solve the issues?

“The technology has always been good, but initially the product was not up to standard, and we more or less got thrown out of some large-scale Swedish companies when we tried to enter that world. We turned it around through continuous improvements of the wedge-locking system, design developments, and by making sure that we had technically skilled people in the sales organisation. Now we act as a partner to large international companies in a variety of sectors and fine-tune customer-specific solutions.”

“During the 33 years that we have produced our washers, production technology has changed immensely. We have roughly 350 variants of the wedge-locking system, but quite often get specific inquiries. A nuclear plant wanted a unique solution and we had to develop a special tool to produce the ten washers that they requested. It was not a cheap solution, especially as they only used two of the washers, but they were satisfied.”

Are there any decisive moments in the company’s history?

“One milestone was when we built the first real industrial building in Mattmar in 1980. The municipality supported us, but the county administrative board said no. They didn’t think we could succeed in this sparsely populated area. In the end we received the funding and were able to start construction, provided we put in ‘real doors, so that it at least can be used as a bus depot’.”

How do you feel about Nord-Lock’s future?

“It is incredibly satisfying to retire knowing that Nord-Lock is growing strongly and has a dynamic management team and wonderful employees.”

Offering a greater field of solutions For Fred Heaton, what started out as a hobby in 1999 quickly grew into a thriving business specialising in hydraulic bolt tensioners. Now Boltight has been acquired by the Nord-Lock Group, in a mov... Read More
Chalmers takes the chequered flag Young engineers from Gothenburg’s Chalmers University of Technology – proudly partnered by Nord-Lock – have won the world’s largest student engineering competition. After ten months of designing, b... Read More
An insider’s outlook If you want to know what is going on in the world of fasteners, ask Salim Brahimi, the authority on fastener hydrogen embrittlement and an active member of several standards committees, for example... Read More
Safety and quality are key Velan’s valves play a critical role in the world’s nuclear power stations. Jean-Luc Mazel, Industrial Director of Velan SAS, the French affiliate of Velan Inc, discusses safety, the aftermath of th... Read More