Mythbusters: A small thread pitch reduces fatigue life due to the notch effect

The Myth: A small thread pitch reduces fatigue life due to the notch effect.

For bolts of property class 8.8, a decrease in fatigue life can also be seen. A larger cross-section of the fine thread will compensate for the decreasing fatigue life. The tolerable load amplitude (diagram b) is practically continuous.

There are more factors that influence the thread pitch than those mentioned. These include, for example, the displacement of the force application point, the root radius, the notch depth, the distribution of load force at the thread pitch and the notch sensitivity of the bolt material. 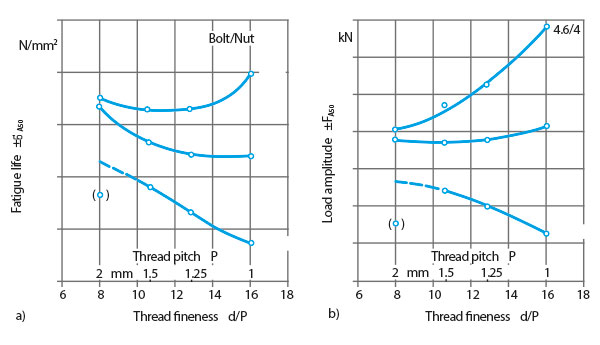 History of the Bolt Bolts are one of the most common elements used in construction and machine design. Yet, have you ever stopped to wonder where they actually came from? Leggi di più
Does Adhesive Works as a Lubricant During Tightening? Chemical thread locking is a traditional solution used against bolt loosening, but does it has the same effect as a real lubricant? Leggi di più
Comparison of Common Bolt Tightening Methods Tightening methods can be categorized according to the principle of how the preload is generated. The 2 basic principles are rotational tightening and tensioning. Leggi di più
Mythbusters: A common misconception is that stainless steel is never affected by corrosion Stainless steel is never affected by corrosion - is this the truth or a misconception? Leggi di più
Do Higher Grade Bolts Have Lower Stretching Ability? The higher the bolt grade, the lower the stretching ability of the bolt. Is this true? Leggi di più
Talking the Torque Experienced assembly technology engineer Bernard Tollet discusses optimising torque and clamp load, and the various ingredients concerning tightening technologies. Leggi di più