Renovating an underground railway system without weeks of construction and chaos caused by delays and diversions was previously unheard of. That is, until a unique concrete bolt emerged in Nuremberg. 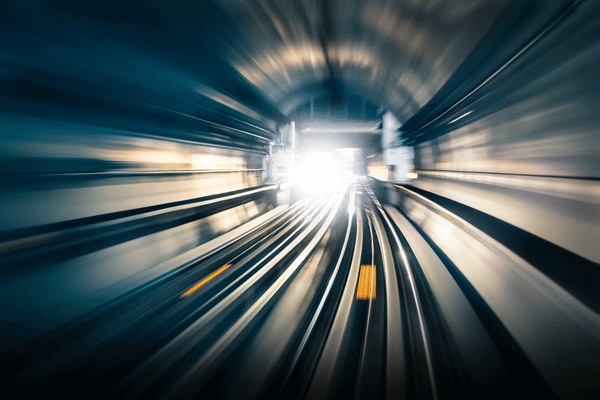 The people of Nuremberg are proud of their underground system, which is among the most modern in Europe. The city, located in Bavaria, Southern Germany, has the only underground network in Germany where two of the three lines operate automatically, without train drivers. Nuremberg trains travel the equivalent of the circumference of the earth twice each day, carrying more than one hundred million passengers per year.

After 40 years of continuous use, it comes as no surprise that a renovation of the track beds is required to ensure passenger safety. The main beam, also known as a concrete stringer, which attaches the tracks to the tunnel floor, has simply sustained damage in too many places.

This is a daunting issue for the provider of the Nuremberg metro services, VAG (Verkehrs-Aktiengesellschaft Nürnberg). Normally, metro companies need to completely shut down a track for weeks during the renovation of such concrete stringers. Employing water pressure to remove the concrete, it is a time-consuming and extremely dangerous job, considering the many power lines inside the tunnel. Long delays caused by closed tunnels are costly for the track operators, adversely affecting train traffic and irritating passengers.

Coming to the rescue, a brand new innovation caught VAG’s attention just as they started planning the renovation. Local Nuremberg dowel and concrete bolt manufacturer TOGE Dübel won a railway innovation award for a new concept that enhances the sustainability of existing concrete bridges. Present in the audience, VAG representatives were intrigued and had the idea of trying the concept for the first time in an underground rail environment. Currently, work is under way at the first three stations: Bärenschanze, Gostenhof and Maximilianstrasse. Work on the second largest station in the network, the “Plärrer”, with 98,000 passengers daily, is planned for 2017.

Instead of complete reconstruction, concrete bolts measuring 36 centimetres and weighing 1 kilo are utilised as load-bearing components to improve the life span of the overall track bed construction. The bolts are fitted with a patented special thread that cuts into the borehole wall upon application. The force of the bolt is mechanically transferred to the anchor base and the concrete is fixed in place.

“Completely removing a concrete stringer and installing a new one could never be accomplished without service disruption,” says Waldemar Gunkel, Technical Director of TOGE and one of the two inventors of the new generation of concrete bolts.

“In Nuremberg, however, our system is only being installed between the hours of 23.00 and 04.00. By the morning, everything is running ­normally.”

During these working hours, only one track is shut down and trains are redirected via a single track, while the porous areas of concrete on each stringer are chipped away and replaced. Finally, the stringers are fixed into the ground utilising the concrete bolts. Since the bolts need to be drilled into the concrete, there is a risk of inclination as the drilling machine might not be positioned at an exact 90-degree angle. That’s why all concrete bolts that are being used in this first project are secured by Nord-Lock X-series ­washers. Their conical shape can compensate for the inclination, while the wedge effect prevents spontaneous bolt loosening due to vibration.

The Nord-Lock connection came via Deutsche Bahn – Germany’s national railway operator – where Nord-Lock original wedge-locking technology has long been prescribed as the standard.

Jochen Süssenbach, Nord-Lock ­Project Account Manager, sees great potential in this new approach to metro renovation. “We’re looking at a huge renovation of the tunnels that virtually doesn’t affect the timetable at all”, he says. “In terms of costs, it’s also a solution that beats any ­conventional method.”

So far, the renovation is running as planned. The first construction phase has even been completed a week ahead of schedule and the total time for construction carried out at all three metro stations will last six weeks instead of several months, which could have been the case with the previous method.

The concrete bolts themselves are designed to last for 50 years. No concrete will last that long, but further renovations will not be necessary for decades.

Describing TOGE’s Innovation Award-winning solution, Bavarian Interior and Transport Minister Joachim Herrmann said the following: “We have our fingers right on the pulse.” He hinted at the billion-­dollar losses that Germany faces due to the poor condition of some 120,000 ­highway bridges and 30,000 railway bridges.

The underground rail systems are in a similar state. Just as in Nuremberg, most metro networks in Germany, as well as in the rest of Europe, were established in the 1970s. Gunkel thinks TOGE has found an important application for its concrete bolt: “This project gives us the boost to further drive our product development forward.”