Friction: A force of nature

Friction is a factor not to be ignored when it comes to tensioning bolts. Always present in a bolted joint, friction can be part of the problem – or part of the solution.

Friction is a force that appears whenever two objects come in contact with each other. It is the opposite of all motion. No matter which direction something moves in, friction pulls it the other way.

Yet, we need friction. Without it, we would not be able to walk, sit in a chair, or climb stairs. Everything would just keep slipping around. 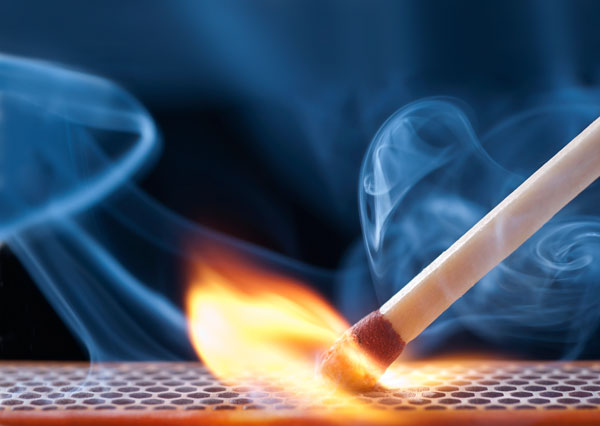 Frank Naumann, former Managing Director of the German Fasteners Association and with more than fifty years of expertise in the field of friction, explains that friction always exists in a bolted joint. On one side, it limits the efficiency to transform the torque into the desired preload, on the other hand it is necessary to keep the preload in the joint to prevent loosening of the parts.

“There are two coefficients, which describe the friction between the rotating parts during the tightening process,” Naumann says. ”First, it is the coefficient of friction between bearing surfaces under the screw head or under the nut µb (μb = washer friction) and second, the coefficient of friction between the threads µth (μth = thread friction). Both of them are consuming a big amount of energy, which is converted in useless heat. For example, in the case, that µb=µth= 0.10, only 16 % of the torque is transformed into preload. One can influence the size of the coefficients by controlled lubrication. In the automotive industry, they mostly use a range between 0.08 and 0.16.”

In terms of bolted connections, friction is sometimes part of the solution as well as part of the problem. Of course, the clamp load in a bolt is mainly determined by the torque required to tighten the bolt. But it is also a function of aspects such as bolt diameter and length, the geometry of the threads and – not to be forgotten – the coefficients of friction that exist in the threads and under the bolt head and nut.
The coefficient of friction is necessary in calculating tightening torques and the resulting bolt tensile forces and stress, and in calculating the resulting friction force between the connected surfaces.

However, the approximate values of friction coefficients found in charts are only representative values. They should be confirmed against other sources of information and preferably testing.

The torque value is dependent on the friction, present in the threads and between the torqued bolt head and nut, and the fastened material or washer if used. In fact, during tightening almost all of the input energy is lost in overcoming the friction under the head, nut and threads. Just a small fraction of the torque is converted into the clamp load or tension.

Torque wrenches do not give a direct measurement of the preload in the bolt. As the torque is applied, it must overcome static friction under the head of the bolt and nut, depending on which end is being torqued, and also in the threads.

Much of the torque applied, around 50 percent, is lost overcoming friction under the torqued bolt head and nut, and about 40 percent is lost in thread friction. Only the remaining ten percent of the applied torque does useful work in stretching the bolt and providing the preload.

Friction is frequently used as a method for locking bolted joints. The most common examples include deformed thread or nylon insert lock nuts, or serrated/teeth/star washers. In these solutions, the principle of friction locking is based on increased friction in the thread or under the bolt head and nut.

However, factors such as torsion, seizing and galling may impact these friction-based solutions in a negative way.

There can also be problems because of increased torsion stress in the joint in ­friction-based locking methods. High torsion may cause the fastener to yield at a lower preload than expected. As friction conditions are uneven, the necessary preload may not be reached.

Fasteners made of stainless steel, aluminium, titanium and other alloys can also sustain unpredictable thread galling (cold welding). In bolting, thread galling appears during fastener tightening as pressure builds up between the contacting and sliding thread surfaces.

In extreme cases galling leads to seizing, which is the actual freezing together of the threads and bolt lock-up. Continued tightening may cause the fastener to be twisted off or result in ripped out threads.

According to Michael Stähler, Product Manager at Dörken, the current trend is to have the bolt or nut coated with the right coating for the task it is expected to perform. This is mainly a coating with an integrated lubrication; a separate lubrication added after a coating is not comfortable any longer as it is an additional step. Also, coatings that are not stable against temperature can cause self-loosening of the joint.

Controlling the clamp load is vital, and this can be achieved by reducing the spread of friction. When using bolted joint solutions that are not based on friction for locking, lubrication can be used.

By reducing the friction through lubrication, the preload control is increased and the spread is significantly lowered. Then the bolt’s full capacity can be used and the life cycle of the bolted joint is extended. A bolt that fails due to fatigue causes unwelcome productions stoppages.

Friction with a Nord-Lock view 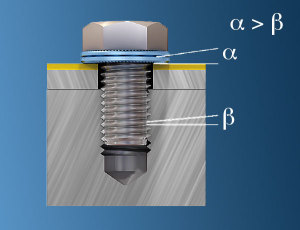 Nord-Lock washers secure bolted joints with tension instead of friction. The washers are designed to create a wedge effect and the proof of this can be seen by the increase in tension during un-tightening.

This wedge effect prevents the bolt from rotating loose. The bolted joints only lose some initial preload due to normal settlements between the contact surfaces.

Reducing thread friction while safely securing the joint is often considered impossible. However, with the tension-based wedge-locking of Nord-Lock this can be achieved with lubrication.

“The wedge-locking method is based on tension instead of friction,” says Lena Kalmykova, Application Engineer at Nord-Lock. “The most common example of the wedge-locking system is a pair of washers which have cams with a rise greater than the thread pitch of the bolt. The washer pair is installed cam face to cam face. When the bolt/nut is tightened, teeth grip and lock the mating surfaces, allowing movement across the cam faces only. Any rotation of the bolt/nut is blocked by the wedge effect of the cams. The wedge-locking ability is not affected by lubrication. Moreover, by using it you can utilise each bolt to its full capacity.”

Friction depends on the characteristics of the surfaces – how flat, round or rough they are. Friction is also dependent of what kind of medium the surfaces are in, if it is wet or dry, or what particles there are in the medium.

It is a very multi-disciplinary field, because it involves different areas such as mechanics, chemistry, and fluid dynamics. You have to go all the way to the atomic level to fully realise in detail what is going on in terms of friction.

The classic rules of sliding friction were discovered by Leonardo da Vinci. They were rediscovered by Guillaume Amontons, who presented the nature of friction in terms of surface irregularities and the force required to raise the weight pressing the surfaces together.

In the last century it was shown that at a microscopic level, the actual area of contact between surfaces is a very small fraction of the apparent area. The development of the atomic force microscope has enabled scientists to study friction at the atomic scale. 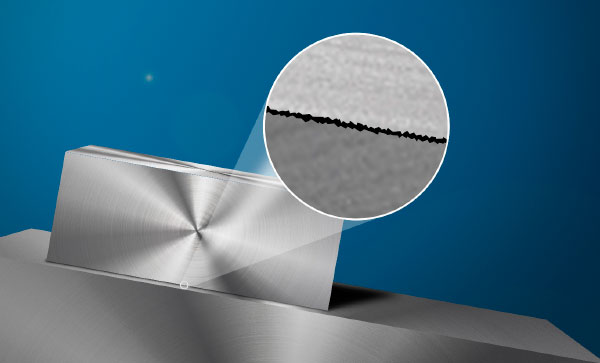 Static friction occurs between two surfaces that are resting against each other. The contours of each surface have an opportunity to settle into each other and really get a good grip.

Thread Standards: The Search for a Red Thread Let's explore the history, the evolution and the future of these crucial but often overlooked thread standards. Więcej informacji
Comparison of Common Bolt Tightening Methods Tightening methods can be categorized according to the principle of how the preload is generated. The 2 basic principles are rotational tightening and tensioning. Więcej informacji
Aluminium: The endless benefits Aluminium has dominated the aerospace industry for over half a century. Now other industries are turning to the miracle metal. Więcej informacji
Combating Corrosion and Protection for Fasteners Any metal product will eventually rust. How corrosion happens and why choosing the right materials and corrosion protection for the bolt is crucial? Więcej informacji
History of the Bolt Bolts are one of the most common elements used in construction and machine design. Yet, have you ever stopped to wonder where they actually came from? Więcej informacji
Does the Torque Still Remain in the Bolt After Tightening? Many people believe that after tightening part of the torque still remains in the bolt - is that true or false? We got the answer! Więcej informacji