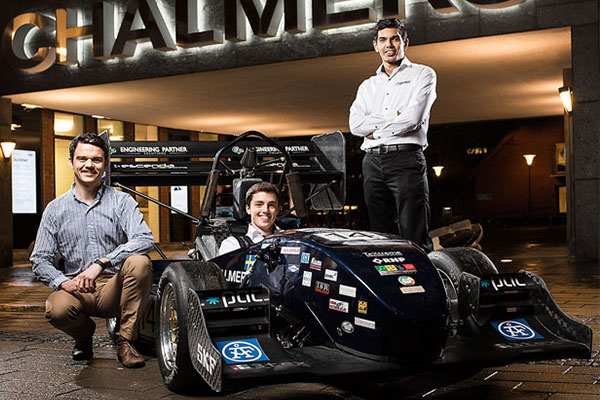 After ten months of designing, building, testing and competing, a team from Chalmers took the chequered flag in the Formula Student competition held at the UK’s Silverstone Circuit.

“Winning this competition is a really big deal for Chalmers and an awesome feeling for the students involved,” says Chad Thomas, Technical Chassis Team member, who is studying for a Masters at the university. “The team really poured their lives into the car.”

The Chalmers car, secured with dozens of Nord-Lock washers at crucial bolted joints, beat 102 other single-seaters in the Class One classification of July’s competition. The car was entirely built by the students, with the only exceptions being the highly complex components such as the engine electronic control units.

“Formula Student is an excellent educational tool which helps deliver the engineers of tomorrow; learning by acquiring the skills we as teachers cannot teach in a classroom situation,” says Jonathan Rice, project leader.

“We carried out a pre-study for two weeks, followed by an eight week design phase,” says Prashanth Sekhar, Communication Team member, who is also taking a Masters at Chalmers. “The manufacturing phase lasted for twelve to fourteen weeks, followed by ten to twelve weeks of testing before the actual competition itself.”

The same Chalmers team also placed third in the Formula Student German competition in August, meaning the university is now ranked 10th out of some 500 teams worldwide.

Nord-Lock’s partnership with the Chalmers team is now in its second year. Race rules state that it must be possible to visually inspect bolt locking solutions. Thus, the team was obliged – unnecessarily, from a technical point of view – to also use nylon insert lock nuts.

“There’s no stock, no waste, and it can be done locally” Since its launch in 2013, Dutch 3D printing start-up 3D Hubs has produced over a million parts, making it the world leader in distributed manufacturing. Leia mais
Built for Speed The world’s fastest conventional trains run in France, and not just to break the April 2007 record of 574.8 km/h (under test conditions with a shortened train). The TGV regularly runs at 320 km/h and at those kinds of speeds it is absolutely vital that nothing falls off the rolling-stock to derail the train. This is where Nord-Lock comes into the picture. Leia mais
A formula for success A key piece of equipment in any pit stop is the pneumatic impact wrench, or wheel gun, which is relied on to loosen the large nut holding on each wheel and then screw on a new wheel – all in the blink of an eye. Leia mais
Building communities through bolts Students from the German city of Karlsruhe founded “Engineers Without Borders – Karlsruhe Institute of Technology e. V.” in 2004 to supply first aid to Sri Lanka in the wake of the tsunami. The clu... Leia mais