“There’s no stock, no waste, and it can be done locally”

Since its launch in 2013, Dutch 3D printing start-up 3D Hubs has produced over a million parts, making it the world leader in distributed manufacturing. Chief Marketing Officer Filemon Schöffer explains the concept.

What is the thinking behind 3D Hubs?
“The current value chain in which goods are manufactured produces a lot of waste. Many products have been produced in very high amounts for economies of scale, but roughly one third never get sold. What distributed manufacturing can bring is ‘on-demand manufacturing’, so goods are only produced the moment they’re sold. There’s no stock, no waste, and it can be done locally.

“3D printing is a new manufacturing technology, and in that it’s doing really well. The scepticism is based on the consumer market, where few people see anything happening. So that would be my message: it’s in the manufacturing sector.”

So, what benefits does 3D printing bring to manufacturing?
“For injection moulding, the most common process used for manufacturing in China, you need to build a mould first, and that means that there are a lot of up-front costs. Without moulds, 3D printing is very price competitive for small-batch production. It’s also on-demand, so if you upload a file now, we can start producing instantly. And because it’s additive, you can do highly complex geometries.”

Are there any specific industries or applications that benefit?
“3D printing is completely conquering the prototyping market. Then industries that need small-batch production of highly complex geometries, such as prosthetics, hearing aids and dental implants. There are already a lot of commercial aircraft with 3D printed parts in them. Replacement parts are also a very large business, which really leverages the on-demand aspect of 3D printing.”

What are the benefits for the fastener industry?
That’s an interesting case actually. As fasteners, almost by definition, are standardised parts, they are typically not suitable for 3D printing – simply not price competitive. However, in a wider context, from a value chain perspective – 3D printing can offer a lot in terms of replacement parts and ‘ondemand’ turn-around. Especially in the technical service branch, we see 3D printing used a lot for these benefits, even for standardised parts. This is where I would see fasteners of any kind benefit as well. 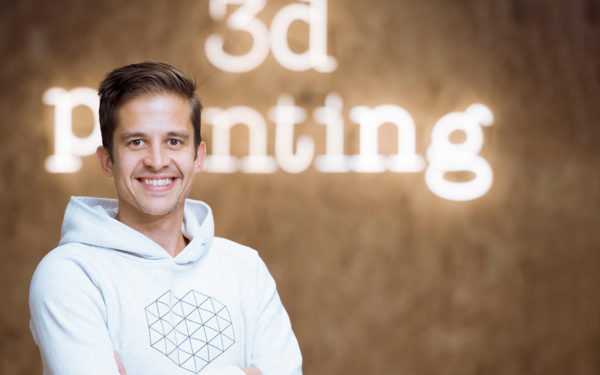 FACTS: FILEMON SCHÖFFER
TITLE: Chief Marketing Officer, 3D Hubs, Amsterdam, The Netherlands.
AGE: 32.
BACKGROUND: I’m an industrial design engineer and physicist, so I know a lot about manufacturing, but I’ve always worked in ads and creative campaigning.
LIVES: Near the 3D Hubs office among the start-ups, galleries and hip bars of Amsterdam’s trendy Westerpark district.
PASSION: AFC Ajax.
INTERESTING FACT: Filemon’s ancestor Peter worked with Gutenberg in the 15th century. “3D printing has a lot of potential to localise manufacturing of lots of things, it distributes both skill and know-how, and I think that’s comparable to what the printing press did.”

Offering a greater field of solutions For Fred Heaton, what started out as a hobby in 1999 quickly grew into a thriving business specialising in hydraulic bolt tensioners. Now Boltight has been acquired by the Nord-Lock Group, in a mov... Leia mais
Fastener peace of mind Understand the risk of hydrogen embrittlement and ensure good sourcing of fasteners by questioning quality-related issues and manufacturer's capabilities. Leia mais
A unique technology is emerging Nord-Lock Group interviews Laurence Claus, an expert in fastener and automotive supplier industries, with more than 25 years of experience. Leia mais
An insider’s outlook If you want to know what is going on in the world of fasteners, ask Salim Brahimi, the authority on fastener hydrogen embrittlement and an active member of several standards committees, for example... Leia mais