The Slussen interchange is an iconic location in Stockholm. It is a dominant feature in the cityscape and a key part of the capital city’s infrastructure. Slussen connects the Baltic Sea to Lake Mälaren and has a long history as a trade route. There has been a lock there, to adjust for the difference in water level between the sea and the lake, since 1642.

The current lock is 85 years old and in a poor state of repair. The City of Stockholm has therefore decided to replace the two current bridges, that connect the city centers Södermalm and Gamla stan, with a new bridge in steel. The new lock will increase the amount of water draining out of Lake Mälaren, thereby reducing the risk of the floods that could pose a threat to the drinking water in this densely populated region. Due to its location at the heart of Stockholm, the Slussen redevelopment has been a hot issue for decades. All this attention is one of the aspects that makes the Slussen project so special. The setting is another key aspect.

Building a new bridge in the middle of a big city without completely stopping traffic for several years is complicated. “Hoards of pedestrians constantly need to pass by. So a temporary bridge has been constructed and is now in place, to make room for the foundation of the new bridge to be built,” explains Tomas Bergström from sustainable society consultants Ramboll, the company that has been working on the bridge part of the project on behalf of the main contractor Skanska. The time constraints, durability and weight are some of the main reasons the bridge is being constructed entirely of steel. “If the entire bridge had been constructed in concrete, it might have taken a year longer,” notes Ramboll’s Chief Designer Tore Lundmark. 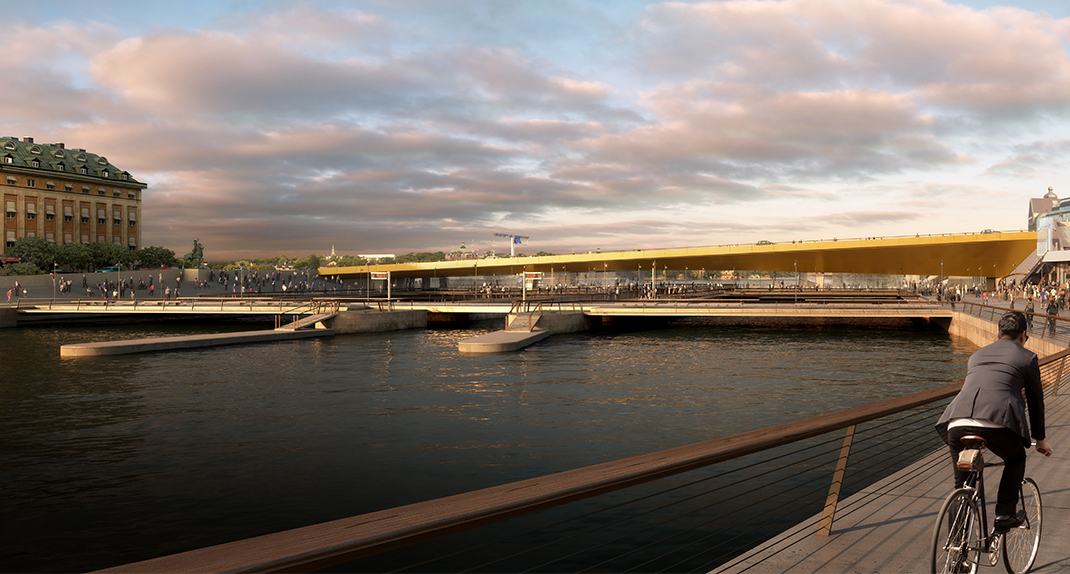 The thickness of the bridge varies, as does its height. The southern section of the bridge is seven meters high, while the northern end of the bridge, abutting Stockholm's well-preserved medieval center Gamla Stan, is less than one meter high. It is a complicated project, and the path to the finished bridge has tested both Skanska’s and Ramboll’s engineers’ endurance and patience to the limit. “We’ve produced 550 drawings.

That’s more than twice as many as for our next-largest project,” reports Tomas Bergström. In order to handle the movements generated in the bridge, Ramboll has chosen to have hinged columns with Expander System axles from the Nord-Lock Group as struts. The Expander System is most frequently used between moving parts in large machines, but Ramboll’s bridge designers discovered it was a good fit for the special bridge design in the Slussen project. “The pressure in the bearings has roughly the same force upwards as downwards. The movements were so great that we were forced to have hinged columns, with spherical bearings with an axle through, and so these axles suited our needs,” says Tore Lundmark.

The bridge will be delivered in one piece by ship from China, where the 72 parts have been assembled by one of the world’s largest bridge construction companies. Once it arrives in Stockholm, it will be moved to Slussen on pontoons in two channels, and then lowered down onto its supports. The new bridge will be installed during the spring of 2020 and this new landmark in the heart of the Swedish capital is scheduled to officially open in the summer of 2021.

“Bridge projects are much larger today. We seldom get the chance to build a single bridge over a river, since those bridges have already been built,” says Tore Lundmark, an honorary doctor at Luleå University of Technology. He has been designing bridges since the early 1980s and during his long career he has been involved – in a variety of roles – in a number of high-profile projects. Standardization and a module mindset are now the norm in many parts of the construction industry. But bridge construction projects are bucking the trend. They just keep getting more and more complex. “There are rarely any straight parts and standardization is almost impossible. Most bridges curve and bend, or have varying widths. Each bridge has a unique character and personality,” says Tore Lundmark.

Benefits: There till be no play between the struts and the bridge structure