Nord-Lock Group Vidensbank What is the relationship between torque, preload and friction?

What is the relationship between torque, preload and friction?

One of the main methods to preload a bolt is to apply a torque on its head. This is a very common process in the industry, however it is not easy to control accurately.

When the fastener is turned down on the thread helix, the rotatory mo­tion transforms into linear motion. This causes the bolt to stretch, while parts are compressed. However, only a small amount of the input torque serves to pre-tension the bolt. Most of it is used to overcome the resistive effect of friction, which opposes the rotation of the fastener.

How friction affects torque and preload?

Friction originates at two contact interfaces; between the turned part and the clamped part (often under the bolt head or under the nut) and in the threads. 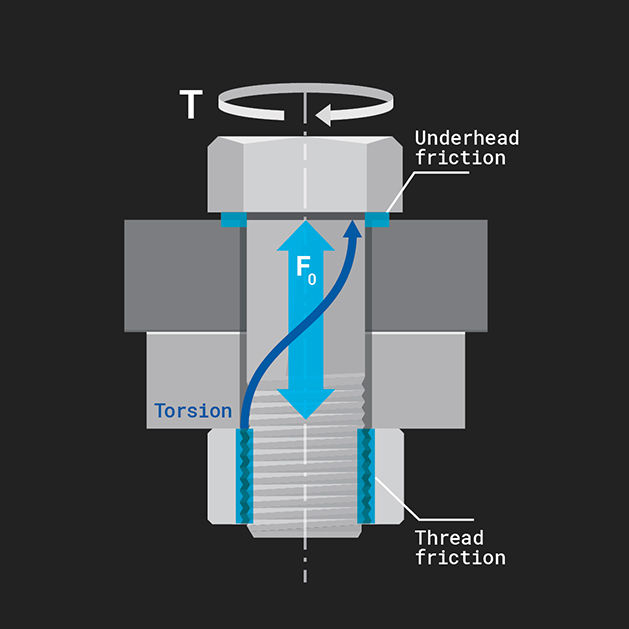 This means that the portion of torque that transforms into preload is very small. Torque/Tensile tests help to characterize the coefficients of friction taking place at both con­tact interfaces. The breakdown of torque usually shows that only 10% of the input torque is useful. The rest is used up by friction.

For example, underhead torque represents 50% of the input torque and thread torque is 40%. Hence, the torque tightening process is not very efficient. This portion can be increased by applying a low friction lubricant. Using lubricant reduces friction and decreases the necessary torque to reach the same preload.

Scatter and its effects

Friction coefficients are also highly variable (+/-20% usually), which introduces scatter in the process. Also, even though tightening tools can be very accurate (+/-1% for calibrated hand torque wrenches for example), the deviation on applied torque varies from +/-10 to +/-50%. Many operators get confused when they realize how much influence the position of their body and how they handle the tool has on the applied torque.

It is commonly known that the scatter in achieved preload is +/- 30%. This means that the maximum possible preload can be twice as much as the minimum possible preload. Scatter can be even higher for rusty bolts or for stainless steel fasteners, which are prone to seizing.

Luckily, scatter can be decreased by applying lubricant or using bolts with a specified coefficient of friction, for example with a top coat or wax.

Want to know more about preload?