The huge machines made by Metso Minerals France are a mechanical nightmare. Whereas vibrations are usually eliminated from machines, the very raison d’être of the Metso machines is to vibrate as much as possible in order to sort and grade stones so they can be used by the construction industry and, to a lesser extent, in the mining sector. 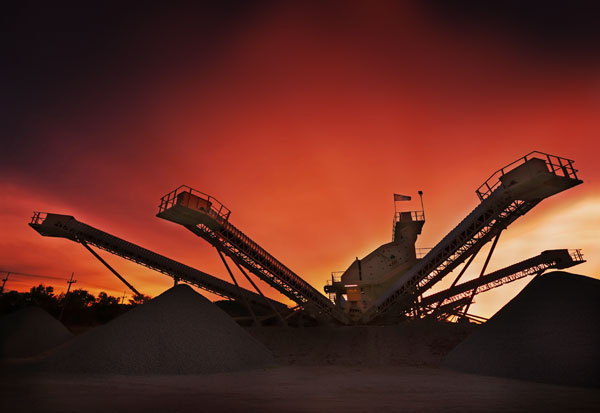 Who would imagine that the burgeoning skyscrapers emerging from the desert sands of Dubai and Abu Dhabi are made with machine-made sand? The Emirates are surrounded by the great wastes of the Arabian desert and yet all this sand is useless for making cement. “The grains are too perfect, too round and smooth as they’ve been worn away over aeons by wind,” laughs Vincent Celsi, Metso Minerals’ Product Manager, Vibrating Equipment for Europe, the Middle East and Africa. “In order to make good quality cement the grains need to be cubic so that they lock together,” he explains.

And so the sand has to be made from rocks taken from Fujairah, the only Emirate of the United Arab Emirates that is almost totally mountainous. The machines that turn rocks into cubic sand grains by crushing or smashing and then sorting them into size by vibrating are made by Metso Minerals France.

The vibrating screens and feeders marketed by Metso throughout the world are designed and, in some cases, built in Mâcon in a 51,000 sq-metre factory which has grown on the picturesque site bordering the wide, slow-moving and frequently flooded Saône river in central France since Joseph Bruno founded a small wood and iron construction company there in 1867.

David Bellec, engineering manager for vibrating equipment mining and construction technology, says that wherever possible the machines, some of which are so large they can only be transported by special road convey, are built close to the clients. The parent company, Metso Corporation has over 30 manufacturing units, including five foundries, throughout the world. “Even if the manufacturing is regional the overall conception and design is global,” he says, so that wherever the machine is built it will be constructed according to a template designed in Mâcon.

There are three different machines used to turn rocks into gravel or sand. The “jaw” is a crusher which can transform a rock that weighs 3 tons and measures 2 m3 into one that measures just 40 cm3. As its name suggests it works like a giant jaw, biting down on the rock and crushing it. The “cone” resembles two shortened ice-cream cones placed inside each other: the larger outer one remains static while the smaller, inner one vibrates against the walls of the outer cone thereby crushing the stones that are caught between the two surfaces. The “impactor” looks like a water wheel in a box where the blades of the fast-spinning wheel catch the rocks and hurl them against the walls of the box, thereby smashing them.

“The choice of machine depends entirely on the crushability and abrasiveness of the rocks being handled,” explains Mr Celsi.

In addition there is the “scalper.” This is a more sophisticated and automated version of the pan that you see in every cowboy film involving gold diggers. It also vibrates a lot harder! It is basically a sieve that vibrates allowing smaller particles to fall through to the next level where there is a finer sieve that catches these and allows even smaller ones to fall through to another level, and so on. At each level the material is evacuated by means of conveyor belts and ends up as those large mounds of differently graded gravel and sand that can be seen at quarries and at sand and gravel companies.

What these machines, which range in size from 2.5 tonnes to 40 tonnes, have in common is that they vibrate “at between 700 to 1,000 turns a minute causing the particles inside to accelerate to between 3 and 6 G forces,” says Mr Bellec. “You can imagine that to make a 40 tonne machine vibrate you need to produce the equivalent of 160 tonnes of effort,” he says.

“By definition this is self-destructing. Vibration is anti-mechanical,” he smiles, “and so you need extremely safe and solid equipment to lock the bolts.”

Facts: Metso Minerals France, Mâcon, France
What it does: manufactures machines that crush and sort stones for the construction and mining industries
Part of: Metso Corporation of Finland which also works for the power generation, oil and gas, recycling, pulp and paper industries
Founded: in 1867, Ateliers Bergeaud Mâcon became Nordberg Bergeaud until 2004, when it was bought by Metso Corp.
Annual sales: €235 million
Number of employees: 471
Bolt securing: Nord-Lock

This is how Metso Minerals France benefits from Nord-Lock washers:

The power of the sun: transformed by Siemens turbines Assembling an industrial-sized turbine requires acres of room. It also requires thousands of bolts and washers to be assembled and tightened to guarantee a service life of the product, which in the solar energy, biomass, oil and gas sectors, is typically upwards of 30 years. Read More
The Mercedes connection Hybrid vehicles use combustion engines and electric motors in parallel. High-voltage supply systems in these new vehicles place considerable demands on the connectors which provide the interface between the battery and the electronics. Read More
Plunging to New Depths In its quest to be the world’s leading service provider for the exploration and extraction of natural resources, Fugro has had to overcome all the world’s natural barriers. With its world class ROVs (remotely operated vehicles) even the deepest oceans are within its reach. Read More
Pulling Their Weight Through the daily grind of its gruelling work schedule, many areas of a tractor, such as the front axle, come under incredible strain and bolt loosening can be a constant problem. ITL use Nord-Lock washers in all such critical areas, including the front axle, engine clutch and gearbox. Read More
Conquering the Seas Mitsui recently began using Nord-Lock components in their marine diesel engines. Because Nord-Lock components are comparatively light and small, they are effective in making assembly and tightening quicker and safer especially in poorly-accessible or confined places. Read More
Built for Speed The world’s fastest conventional trains run in France, and not just to break the April 2007 record of 574.8 km/h (under test conditions with a shortened train). The TGV regularly runs at 320 km/h and at those kinds of speeds it is absolutely vital that nothing falls off the rolling-stock to derail the train. This is where Nord-Lock comes into the picture. Read More