The City Tunnel is a rail link between Malmö and the Öresund Bridge in Sweden, with a six kilometre railway running under Malmö city centre. The glasswork company Skandinaviska Glassystem, was assigned the task of constructing the roof of the new Triangeln railway station situated in central Malmö. This required a bearing frame in high strength stainless steel covered in 1,200 square metres of glass comprising 1,600 different sections. The steel construction’s arms meet in nodes, which are exposed to vibrations from outside, as well as from the trains below ground. After the glass has been put in position, it is impossible to check if a bolt inside a node is coming loose or not. For this reason, the team had to find a bolting solution guaranteed to stay in place.

“These washers were the only ones that could offer this kind of wedge-locking effect, thanks to the cams on the inside of the washers”, says Stefan Abrahamsson, Project and Marketing Manager at Skandinaviska Glassystem. “We were absolutely sure that the bolts wouldn’t come loose, but we needed to convince the customer that Nord-Lock washers were better than any of the bolt locking systems approved in the Swedish Regulations for Steel Structures.”

Nord-Lock therefore performed extended tests of the washers’ ability to secure bolts safely in this kind of glass and steel construction. These tests were successful and more than 5,000 Nord-Lock washers were used to secure the bolts in the nodes of the Triangeln steel construction. Different washers were used for bolt sizes ranging from M12 to M24, depending on the pressure or pulling effect of the steel arms.

The City Tunnel was inaugurated by the king of Sweden at the end of last year and the Triangeln is now the third largest railway station in Sweden. Every day, 37,000 travellers pass under the glass roof that is so safe that it has even been officially branded “hooligan proof”, which means that it could cope with four football hooligans, each weighing 100 kilo, simultaneously jumping up and down on every single square metre of the roof. In November 2011, the Triangeln won the Kasper Salin prize, which is the most prestigious architecture prize in Sweden. 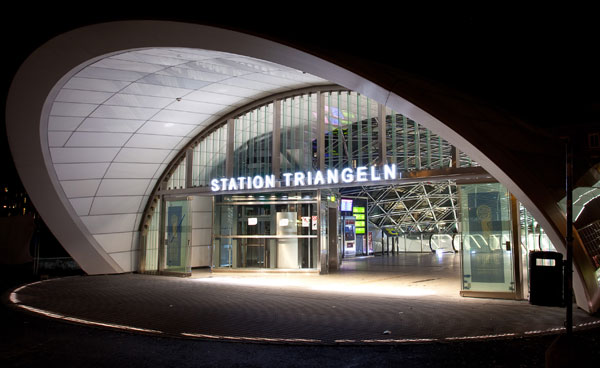 Tunnel vision Twenty meters beneath the streets of Malmö, Sweden, the new underground section of the city’s central station is gradually taking shape. Read More
Safety secures trust For more than 30 years, unsurpassed safety has been synonymous with the Nord-Lock Group. Read More
Staying on track By using Nord-Lock washers, PT. INKA can now be sure that the bolted connections between the bogies and under frame of their trains are fully secured. Read More
Focus on security in windy and vibrating environment Dutch company Akkadia manufactures specialist CCTV systems for demanding situations in various industries. Its cameras can be found everywhere, from offshore, to polar regions and deserts. Read More