Imagine if a bolt came loose on a crane, resulting in a 10-ton load dropping on passersby on the street below. Or what would happen if slackening on the bolted joint of a conductor on a power transmission line led to a power outage for several days in a large urban area?

Bolts are the crucial components that hold many critical products in our everyday life together. They need to be robust enough to withstand all types of weather conditions, extreme wear and tear, and, sometimes, being installed incorrectly. All too often, they must battle all of the above, meaning that sometimes the bolt can come loose or slacken. Over time, these miniscule shifts in the bolted joint turn into defects and end up as a costly, time consuming, and, in a worst case scenario, dangerous situation.

For years physicists and experts have battled to come up with solutions to combat loosening, relaxation and creep in bolted joints. More recently, they have been investigating the use of bolted joints in heavy industry where there is a risk of bolt loosening as a result of vibration and dynamic loads from spontaneous movement such as wind or inconsistent usage.

Two terms, ‘settlement’ and ‘relaxation’, often crop up in issues related to bolt failures. Settlement is the amount of microns lost between the contact surfaces in the joint, for example, the adaptation of the surface roughness. Relaxation is mainly caused by the relaxation of the stressed materials over time. The bolts or the clamped parts might lose their elastic strain, creating a loss of preload into the bolted joint.

“The challenge is related to the balance between the elongation of your bolt and the loss of compression in your parts,” explains Maxime Thonnerieux, Global R&D Director at Nord-Lock. “If you lose microns because of settlement then you will lose elongation of your bolt because everything is connected. The challenge for our customers is to first of all figure out if they have significant settlement in their joint or not.”

If the customer faces settlement or relaxation because of failing to install an adequate secure bolting solution, the next challenge, according to Thonnerieux, is ‘how to fix the problem?’ “If they can access the joint they can retighten it if they have figured out the problem, but this will be a time-consuming process. Sadly, in a lot of cases, they don’t figure it out until the issue has escalated.”

Having spent over 22 years at Austrian company Mosdorfer working with fittings for overhead transmission lines in the energy industry, Wolfgang Troppauer, Innovation Director, has had first-hand experience about how the combination of creep and poor installation techniques risked jeopardising power lines in Asia. This is one of the reasons why the 300-year old company is taking the problem of creep very seriously.

“This phenomenon of loosening bolts did actually occur a while ago,” reveals Troppauer. “What happened was a combination of a simple bolt and washer connection and relatively poor installation work by the linesman on site, resulting in undue pressure and, in the long term, failure of the bolted joint.”
Creep, especially in conductors, is one of the biggest challenges facing Mosdorfer, which supplies utilities and transmission system operators (TSOs) worldwide with tension and suspension towers, tension strings, fittings from low temperature steel, vibration dampers and roller suspension clamps for low voltage lines. In addition, the quality, and means, of installation on transmission lines varies dramatically from country to country.

“Generally in Europe, workmen are well trained and use cable carts to install the damping system on to the conductors, which makes it much easier for them to work,” he explains. “However, in some other countries, the linesmen have to physically climb onto the conductor bundles and hang 30 to 40 metres in the air. If the bolts are not tightened properly, there’s a real danger that the clamp will loosen and the conductors get damaged or fail completely. There are a lot of cost-saving issues which, at the end of the day, mean a higher risk of the product failing.” 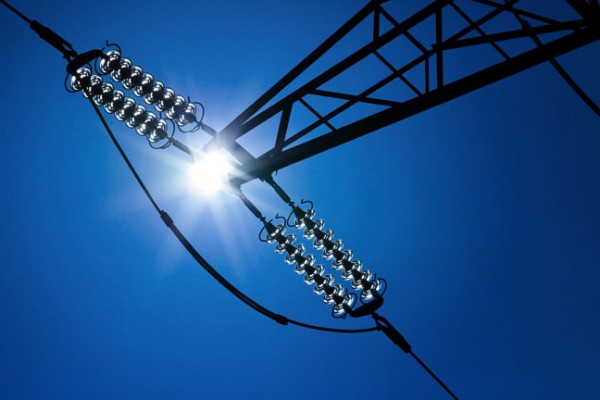 One of Mosdorfer’s core products is spacer dampers which are fixed in bundled configurations to keep conductors at a certain distance from each other on the transmission line and are used to dissipate energy within the conductors. “These are really very important products because if you do not dampen the conductors and dissipate the wind induced energy, and, if, in a worst case scenario, they fall down, the line could blackout for hours or even days,” says Troppauer.

The spacer dampers have bolted clamp connections where the clamp is bolted on to the conductor. The hinged joint is tightened with bolts and nuts. The conductors are usually very dynamic as they tend to vibrate because of wind. If the connection is not robust, there’s a risk that the bolt may come loose.
The conductors are fixed between two towers which are 30-80 meters high; they are weights with static loads which must withstand dramatic temperature differences. At peak times such as lunchtime, the conductors become very warm as a result of the high demand for electricity, while during the night they cool down due to a reduction in the demand for power, as well as cooler evening temperatures. This can mean a temperature difference of 50 to 70-degrees Celsius, resulting in a high speed creeping process.

Conductor creep, due to constantly changing temperatures, can cause the diameter of the clamp to decrease and lose preload. Creep is also exacerbated by the fact that the conductors are made from aluminum, a relatively cheap, lightweight and high conductivity material with high corrosion resistance.

“In our business we have millions of these bolted connections so for each bolted connection that relaxes, there is a major risk of loosening. If there is too much relaxation and the bolt loosens, this could loosen the clamp from the conductor and the clamp could end up moving on the conductor. Even if it moves by just one millimetre, this will damage the aluminium conductor, which is a very serious issue,” says Troppauer.

“Digging a bit deeper into this incident, we discovered that in order to combat creep, the washer would require additional elasticity. We needed to come up with an alternative product that could withstand faults that arose during the installation process, plus extreme weather conditions and heavy loads, in such critical applications,” he continues.

Nord-Lock has recently launched the patented X-series washer that features a unique wedge-effect design combined with an exceptional spring effect. X-series washers have been specifically designed to protect bolted joints from spontaneous loosening and compensate for loss of preload caused by slackening. “The X-series is the result of our goal to design a system that would eliminate insecurity,” says Maxime Thonnerieux, who is behind the development of the X-series. “Beyond vibration and dynamic loads, the X-series allows us to serve customers with a multitude of other challenging application areas, such as painted or powder-coated surfaces, soft metals, composites and polymers.”

Wolfgang Troppauer and his team are currently testing the anti-loosening feature and the static and dynamic behaviour of the new X-­series washers in the Mosdorfer vibration test lab in Austria. The final results will be available in 2013.

“As most of our products are designed for a 30 to 50-year lifespan, we need to simulate them in a 30-year environment. Once they’ve been installed on high voltage lines, it’s not easy to switch the lines off and leave people without power for hours,” Troppauer explains, adding that, so far, the results look promising.

Slackening is loss of preload due to plastic deformations without any rotary movement, and can cause loosening among other problems. There are three mechanisms that can cause slackening:

In bolted joints, creeping and relaxation occur simultaneously, thus both fall under the same category of relaxation, i.e. loss of preload due to plastic deformations from material restructuring over time.

Mosdorfer was founded in 1712 and initially made knives and blades before moving into manufacturing machine parts after the World War II. Mosdorfer specialises in parts for overhead transmissions, supplies utility and grid companies, contracting companies and wholesalers worldwide. The company produces over 30,000 different kinds of overhead transmission line fittings for voltages from 1kV up to 1200 kV. They also make low temperature steel fittings, vibration dampers, and roller suspension clamps for low voltage lines. Mosdorfer’s has clients worldwide, although they are mainly in Europe, the Far East, India, USA, South America and Canada. The company is located two hours south of Vienna, Austria.

Nord-Lock’s patented X-series washer combines the company’s wedge-locking technology which prevents spontaneous bolt loosening with an exclusive spring effect that protects against slackening caused by settlement and relaxation. This unique combination means the X-series can offer the highest security for critical bolted joints.

As with Nord-Lock original washers, each washer pair has cams on one side and radial teeth on the other to secure the bolted joint through tension instead of friction. The conical shape of the X-series washers also creates an elastic reserve in the bolted joint to compensate for the loss of preload and prevent slackening.

Upon tightening the fastener, the washers flatten and the serrations engage the contact surfaces. Since the cam angle (α) is greater than the thread pitch (β), the wedge-locking effect will prevent any rotation of the fastener. Directly after tightening, the joint settles and the fastener sinks into the surface material. The washers immediately deflect and the spring effect (Fs) counteracts the slackening movement (ΔL) of the bolt, thereby preventing loss of preload in the joint.

These multiple functions continuously act on the bolted joint to maintain preload and prevent spontaneous bolt loosening, serving as an effective solution for vibration, dynamic loads, settlement and relaxation.

In perfect rotation Since 1947, trucks from all large manufacturers such as Volvo, Scania and MAN find their way to Swedish truck body builder Laxo Mekan AB for customised chassis construction work. Read More
Right on target For over thirty years, Biathlon Target System Kurvinen has been a world-class pioneer in biathlon target and range systems and has exported its products to over 30 countries. During a competition, Kurvinen targets will be continuously shot at and subjected to thousands of hits. Read More
Advantage iDapt Tennis rackets are subject to huge amounts of stress. Ever-changing hitting angles, ball speed and forces lead to vibration, twisting, deformation and settling issues. Looking to upgrade the iDapt construction, Dunlop turned to Nord-Lock. Read More
Washers safeguard transport safety To avoid accidents that would put people and the environment in harms way, it is crucial that the transport of liquids is managed safely and efficiently. Read More
Nord-Lock Group keeps the railway industry on track Nord-Lock wedge-locking washers are used in all safety-related areas of the railway industry, such as bogies, coupling devices, brake systems, rail dampers. Read More