Order in the court

Invented 50 years ago in Mexico, the racquet sport padel tennis is now played all over Europe. In Sweden, sport floor specialist Unisport is riding the hype, having built around 60 padel courts so far. However, the harsh spring storms in Malmö, in the south of Sweden, created an unexpected challenge by battering the courts’ glass walls and causing the bolted joints to vibrate loose. At the very worst, the walls could collapse.

Unisport’s tool supplier recommended Nord-Lock, who suggested using NL10spss washers to lock the nuts to the frame and then use adhesive in the threads between the bolt and nut. To secure the bolt with Nord-Lock was not an option due to the shape of the bolt head, as it would have affected how the ball bounces against the surface.

The padel court has not experienced any problems since, and padel tennis has become safer for players as the risk of collapsing glass walls has been eliminated. The solution also saves money for Uni­sport because the court needs less maintenance. After this success, Nord-Lock and Unisport are discussing changes to padel court construction by securing the bolt with a mechanical lock instead of the adhesive, increasing safety even more. 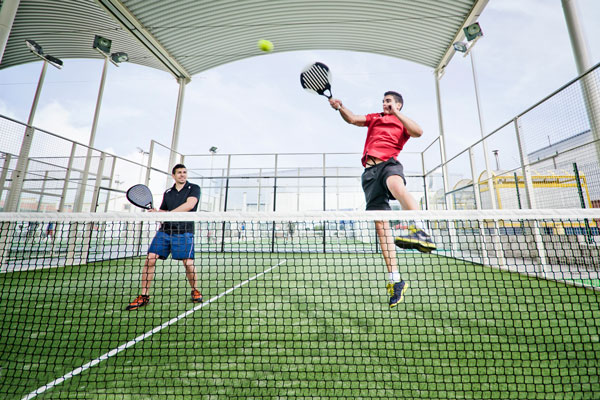 Safety secures trust For more than 30 years, unsurpassed safety has been synonymous with the Nord-Lock Group. Read More
Powerful circles Nord-Lock enlarged external diameter wedge locking washers make the connections on a circular storage unit for lignite absolutely secure. Read More
Rallying for safe bolted joints Motor sports are not easy on the cars. High speed, torque, vibrations, g-forces and hard knocks put enormous strain on the cars and their components. Read More
Order in the court The Challenge Invented 50 years ago in Mexico, the racquet sport padel tennis is now played all over Europe. In Sweden, sport floor specialist Unisport is riding the hype, having built around 60 pa... Read More
Innovative wind turbine maker gets peace of mind with Nord-Lock Quality and durability are Eastern Wind Power’s top priorities for its 50kW vertical axis wind turbines. Read More
Renovating Nuremberg’s metro – without affecting the timetable Renovating an underground railway system without weeks of construction and chaos caused by delays and diversions was previously unheard of. Read More