With oceans covering more than 70 per cent of the earth’s surface, wave power is potentially a huge untapped source of renewable energy. The problem is that most wave energy converters are too large and costly to be commercially viable. Swedish company CorPower Ocean could have the answer. 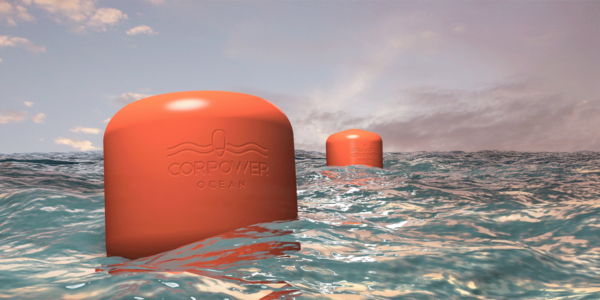 The company’s compact Wave Energy Converter works by oscillating in resonance with waves, amplifying their motion and then converting that energy into power. CorPower Ocean founder, cardiologist Stig Lundbäck, invented the initial concept based on the pumping principles of the human heart. In the same way that a heart uses hydraulically stored energy to form back in place, the Wave Energy Converter uses a pneumatic pre-tension system to pull down the buoy after it has been lifted by a wave.

This allows for a relatively small device to harvest a large amount of energy. It is estimated that one buoy, eight metres in diameter, can generate around 250 kilowatts of power. That is enough electricity for around 200 homes.

“If you look at wave energy potential, somewhere between 10 to 20 percent of global electricity consumption could be provided by wave power,” says Patrik Möller, CEO, CorPower Ocean. “It has the potential to become the most competitive source of renewable energy. It offers five times more energy density than wind and ten times more than solar power. Waves have fewer variations and are more predictable than sun and wind, so you know a few days in advance what the energy flow will be.”

Currently, the Wave Energy Converter is undergoing tests with simulated wave loading, while a full-scale demonstration is being set up to begin in 2017. One of the key challenges has been keeping the buoy small and lightweight, while at the same time strong and durable enough to survive the toughest storms at sea.

This has presented a number of fastening challenges. On the mainframe inside the buoy, Cor­Power Ocean has elected to use Superbolt ­tensioners due to their lower torque requirements compared to a single bolt, which makes assembly far more manageable. Superbolt can also guarantee reliability over the buoy’s intended 20-year lifespan. At the base of the buoy, Nord-Lock washers are used, since they can maintain the correct tension over many load cycles over a long period of time.

Pressing problem solved with Superbolt Superbolt tensioners secure Sodick's moulding machines allowing to control the force on the joints and guaranteeing optimal performance of the machines. Read More
Superbolt tensioners secure Tata Steel’s BOS converters The Tata Steel’s Port Talbot Basic Oxygen Steelmaking (BOS) plant in South Wales produces some 4.5m tonnes of strip steel a year, making it one of the largest plants in Europe. Read More
Ecuador's new power Ecuador already meets 45 percent of its energy needs with hydroelectric power, but is aiming to increase this to 93 percent by 2016. Read More
A charge from the Alps Backdropped by the Alps, a Swiss power plant has solved the problem of storing electricity. Read More