The holy grail of jackbolt tensioning

Since the launch of the Superbolt Multi-Jackbolt Tensioner (MJT) in 1984, efforts have been made to constantly improve efficiency. One suggestion came up regularly - to tighten multiple jackbolts simultaneously.

The consensus was that this idea was technically and cost effectively extremely difficult to develop, until an inventor from Australia inadvertently built the technology that would change the course of jackbolt tightening forever.

In 2014, Andy McPhee visited his friend and fellow inventor, Peter Armstrong. He found Armstrong hunched over the kitchen table working on a design for a continual motion tool that could replace a traditional hydraulic torque wrench. McPhee looked over his friend’s shoulder and, always full of ideas, made a few suggestions. Since Armstrong did not have the CAD capabilities to implement them, McPhee offered to help.

“I used to have my own company, which supported crazy mad inventions,” explains McPhee. “We helped people with wonderful ideas bring them to the market. I’ve also invented many things, I get real pleasure out of creating things and seeing them come to life.” 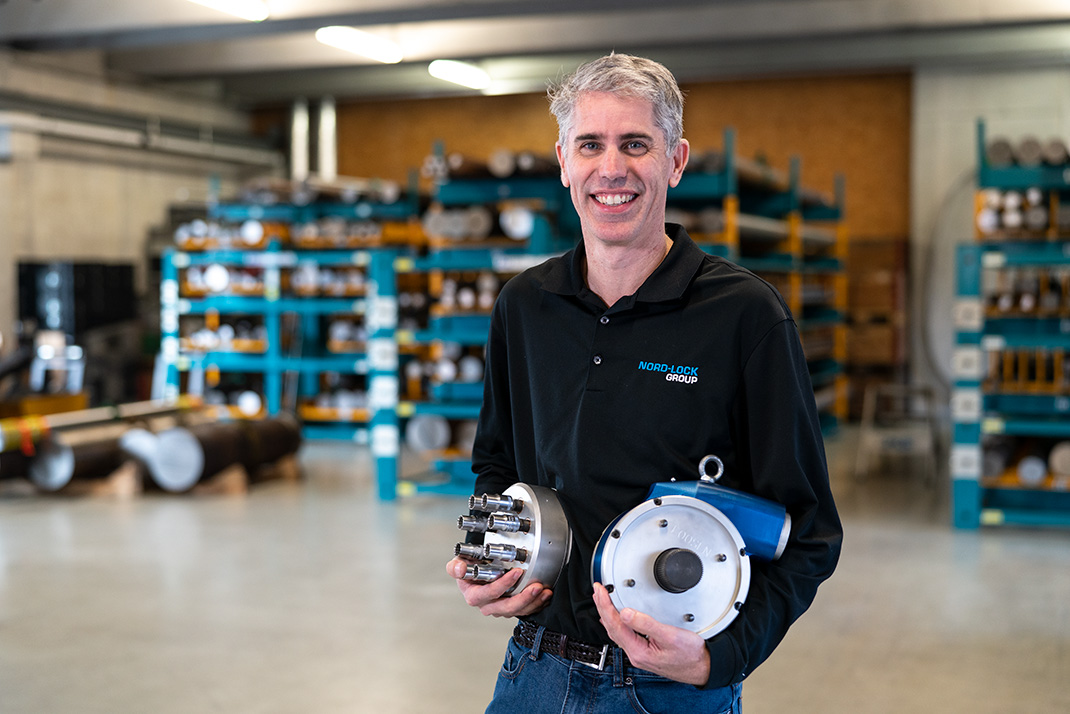 The idea was exactly what the industrial sector needed and it was not long before outside interest started to grow. In January 2015, as the pair were finalizing the drive technology for a potential investor, they got a call from an old contact who worked for Nord-Lock Group and invited him to take a look.

Little did they know that this was exactly what Nord-Lock Group had been waiting for – a compact drive mechanism that could generate enough torque required to tighten multiple jackbolts simultaneously. At this time, a very conceptual model was unveiled to show how the drive, powered by what they were calling ‘scroll drive technology,’ could be utilized. Soon, McPhee and Armstrong were officially developing the new Superbolt Tool for Nord-Lock Group.

Although McPhee and Armstrong were on the right track, there were still challenges on the horizon. Indeed, how do you develop something that is potentially impossible to create? “It’s sort of been a holy grail to see if someone could figure out how to tighten multiple jackbolts simultaneously,” explains Steve Greenwell, Director of Tensioning Division at Nord-Lock Group. “Not only is it technically challenging, the forces and torque requirements involved are also very high.”

One of the biggest challenges they encountered when developing the Superbolt Tool was optimizing the ‘scroll drive technology’ — now known as UniForce — which needed efficient torque delivery to drive the Superbolt jackbolts. The technology was derived from a worm drive, which incorporates standard balls and a scroll. Rather than having one point of contact, the inventors decided to distribute it over several teeth in order to increase efficiency.

“It took me many hours to calculate the helical path of the scroll because it’s forever changing its diameter as it constantly engages the balls in the ball gear when it rotates around,” says McPhee.

It took me many hours to calculate the helical path of the scroll because it’s forever changing its diameter as it constantly engages the balls in the ball gear when it rotates around.

This was solved with the use of a highly ingenious ratcheting drive cassette, which only needs a simple battery drill for op­eration. Now the main tightening can be performed using the Superbolt Tool with a power cassette attachment. “There’s still challenges out there,” explains McPhee. “But it’s all about ser­vicing the customer and doing the best possible job for them.”

Indeed, customers have been at the heart of the develop­ment process, something that is part of McPhee’s philoso­phy. “I studied industrial design and whilst there was heavy emphasis on engineering, it was also critical to think about the human side of things as well,” he explains. “That’s very impor­tant in terms of how I look at functionality.” McPhee wanted the Superbolt Tool to be quick, simple and easy to handle — and he succeeded.

“The Superbolt Tool is unique,” says Steve Greenwell. “Customers with many MJTs or those that have to undertake frequent maintenance will achieve impressive gains in efficiency and timing”.

The Superbolt Tool is unique. Customers with many MJTs or those that have to undertake frequent maintenance will achieve impressive gains in efficiency and timing.

Although the Superbolt Tool has just been released, McPhee’s mind is already racing with potential developments. “The sky’s the limit with the Superbolt Tool,” he says. “There’s a lot of scope out there for future development and I’m really excited. One of these days it could end up on a space station – who knows where we go with this.”

How does the Superbolt Tool work?

The key principle behind the Superbolt Tool is powered by UniForce Technology – invented by Nord-Lock Group. The patented technology consists of a unique scroll and ball drive mechanism for uniform and high transfer of torque. In operation, effective torque amplification is achieved in a very compact design – with input torque kept to a minimum. Tailored cassettes, which attach to the main drive unit, are used to transfer the necessary torque equally to each of the Superbolt tensioner jackbolts.

Ensuring alignment on hydropower turbines Coupling alignment is key for the smooth operation of hydropower turbines, however, many plants are forced to schedule frequent maintenance due to misalignment. When a hydropower plant in Vietnam w... Read More
Imagining the successful solution in your mind Like a winning athlete, can a maintenance manager see the perfect fix in his mind before actually doing it? Japan Steel Works might have the answer. Read More
Solving a Pressing Issue with Superbolt Tensioners From hydropower generation facilities to bookbinding press, the usability of Superbolt multi-jackbolt tensioners transcends across different types of applications to keep bolted connections firmly together. Read More
Alstom and Nord-Lock Group: A secure coupling French multinational Alstom is a global player in the rail transport industry with a raft of international customers seeking the most comprehensive range of products and services on the rail market. Read More
Swivel shackle with impressive lifting power The Swivel Shackle Giga DSS from Codipro incorporates a Superbolt tensioner. This is the most efficient lifting ring ever made and can handle turning loads. Read More
Looking deep into the stars The Large Binocular Telescope (LBT) on Mount Graham in Arizona, USA, is already one of the world’s most advanced optical telescopes. It consists of two 8.4-meter primary mirrors on a common mount s... Read More
Improving steel mill safety and productivity The JFE Steel Corporation’s West Japan Works is one of the largest and most advanced steel mills in the world. Switching to Superbolt multi-jack tensioners has turned one of the riskiest maintenance tasks in the plant into one of the safest. Read More
Converting Sea Wave Motion Into Energy With oceans covering more than 70 per cent of the earth’s surface, wave power is potentially a huge untapped source of renewable energy. Read More
Pressing problem solved with Superbolt Superbolt tensioners secure Sodick's moulding machines allowing to control the force on the joints and guaranteeing optimal performance of the machines. Read More
The wind turbine time machine With the sector growing globally every year, the wind energy industry is looking to use less material for producing big wind turbine parts. Read More
Taking wind energy to new depths Offshore wind turbines are an increasingly common sight as the world moves towards more sustainable forms of energy production. Read More
Fusion Power Swiss Plasma Center's problems with vertical, horizontal and axial vibrations are solved with the installation of Superbolt expansion bolts. Read More
Superbolt tensioners secure slurry pump cover Two sets of hydraulic wrenches were used previously, with one used to achieve 21,000 lb•ft (28,470 Nm) on the 16 perimeter bolts and another used to achieve the 35,000 lb•ft (47,450 Nm) for the cut water bolt. Read More
Towering challenge for a giant crane Challenges are nothing new to Terex Tower Cranes, an Italian-based manufacturer of cranes for construction and industrial use founded (as Comedil S.r.l) in 1962. Read More
China: Opportunities on the coal market Xi’an Coal Mining Machinery has approved Nord-Lock washers and Superbolt tensioners as specialised components for its shearers and roadheaders. Read More
Ecuador's new power Ecuador already meets 45 percent of its energy needs with hydroelectric power, but is aiming to increase this to 93 percent by 2016. Read More
Superbolt tensioners secure Tata Steel’s BOS converters The Tata Steel’s Port Talbot Basic Oxygen Steelmaking (BOS) plant in South Wales produces some 4.5m tonnes of strip steel a year, making it one of the largest plants in Europe. Read More
Tensioners on Alcoa 50,000-ton press When Alcoa decided to redesign and rebuild their iconic 50,000 ton press located in Cleveland, OH, they contacted Superbolt to design specialty tensioners that could handle the demanding bolting requirements. Read More
A charge from the Alps Backdropped by the Alps, a Swiss power plant has solved the problem of storing electricity. Read More
Giant hammer Driving a pile into the ground involves lifting a 6,000 kg (13,200 pound) weight and accelerating it from a 150 cm (five feet) height, creating a 105 kilojoule force (78,000 foot pound) collision –... Read More