The Japan Steel Works, Ltd. (JSW) in Muroran on Hokkaido island operates one of the world’s largest forging presses, capable of handling enormous steel ingots weighing up to 670 tons. The company, founded in 1907, is today a well-established manufacturer of large size cast and forged steel products, sheet steels and industrial machinery parts. With 3 plants in Japan, and 18 offices around the world, JSW uses advanced technologies to manufacture pressing machines, turbine shafts and even Japanese swords. 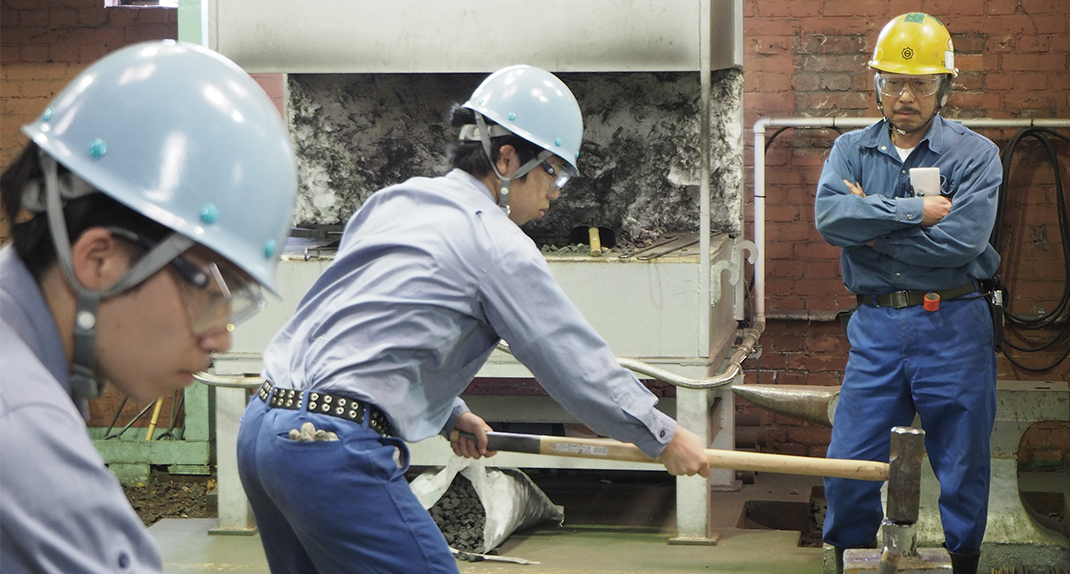 As part of their aftersales service, the company has recently started offering maintenance services for pressure vessels, pressing machines and other pieces of heavy equipment. A major maintenance challenge that JSW has faced in its operation for many years has involved the tightening and untightening of the giant bolts on its hydraulic forging presses and on the massive water pumps that drive them. This includes M180 size bolts securing the "balancer rods" on the 14,000-ton hydraulic forging press and M64 bolts on the water pump which tighten its cover and main structure to withstand the enormous pressure needed for the hydraulic forging press.

The problem was that it was difficult to achieve accurate and uniform tightening of these big bolts. JSW had traditionally used hammering or a hydraulic torque wrench, which were the only available methods. However, this led to inaccurate tightening, and even sometimes to bolt failure due to the variation in preload.

A very frustrating, and costly, problem

Mr. Takumi Kawauchiya, who has been responsible for JSW’s Manufacturing Division facility maintenance for over 30 years, says that this problem had been very frustrating, both for him and for the company. “We were using very forceful tightening methods, hammering and hydraulic torque wrenching, which were both inaccurate and physically fatiguing for our people,” explains Mr. Kawauchiya. “It was a heavy burden on the workers and at the same time it wasn’t functioning perfectly. Sometimes, we would even experience bolt failures in these well-designed machines due to inaccurate preload on the bolts.”

A mental image of the successful solution

Like a professional golfer who before hitting the ball imagines where it will go for a positive result, Mr. Kawauchiya says he likes to paint a mental image in his mind of what the successful outcome will look like for any repair challenge he is facing. “I visualize the whole work process in my mind, including examining what might be the best way to fix the problem, option A or B, and then go through it step by step. Only after I finish creating this image do I start working,” he says.

The bolting challenges were a serious problem which were messing up his well-considered strategies. Normally, he continues, when unexpected incidents happened, he made an alternative plan from the experience and re-visualized the whole process. However, when an unexpected problem like bolt breakage occurred it would stop the entire operation of the facility. The longer it was stopped, the greater the monetary losses, which can amount to tens of thousands of euros for one single day. “Obviously, there was nothing more important than how quickly we could recover and restart,” Kawauchiya comments.

Happily, his dream came true a few years ago. When Mr. Kawauchiya tightened the large-size bolts with Superbolt for the first time, he says he was pleased as he realized that this long-term, difficult-tosolve problem had indeed been solved. “When I finished tightening them, I was totally moved by Superbolt. I saw it was a true problem solver.” Mr. Kawauchiya explains this was because of the ease of the operation, compared to the earlier work of hitting large bolts with a hammer.

Due to its unique design, some people initially raised doubts whether Superbolt could really tighten large size bolts or that it would be too time consuming to tighten all the small jackbolts on the nut body. When asked how he responded to these concerns, Mr. Kawauchiya answers that the other methods had drawbacks as well. “The hydraulic torque wrench requires heavy units like pumps. And hammering is very heavy work as well, meaning we get exhausted when we tighten many large bolts. Compared to those methods, Superbolt is a lot easier even though we need to tighten the jackbolts.”

The benefit delivered by Superbolt is not only the reduced workload. Safety of the bolt joint, to prevent bolt breakage and the associated dangers, is also improved. Superbolt can prevent bolt breakage due to its “Flex-in & Flex-out” structure brought about by the patented design of the jackbolt. This distributes the stress which is normally concentrated on the first and the second screw threads to the whole threads by opening the lower part outward and closing the upper part inward during tightening.

Mr. Ryu Kobayashi, who has been in charge of designing production equipment for many years at JSW’s Equipment Division, considers this to be a great advantage.

In fact, it is the secret to preventing the breakage of bolts, and analysis of testing data shows that Superbolt equalizes the stress on each screw thread very evenly. Hydraulic nuts may also reduce the workload of tightening, but they do not function to prevent the bolt breakage. This technology is patented by the Nord-Lock Group and products which copy the structure do not have this feature.

Mr. Kobayashi also points out other advantages of Superbolt from a designer’s point of view. “The accuracy of bolt tightening by hammering varies considerably from person to person so some bolts might not be tightened well. Even if the bolt is tightened, it might not have enough preload. The repeatability of Superbolt is great and anyone can tighten the bolt to the same state, resulting in better safety of the maintenance repairs.” This high repeatability reduces the risk of improper work and prevents accidents, and also helps reduce unplanned and expensive downtime.

Just like a designer at a machine manufacturer gains benefits from Superbolt, end-users of the machines can also reduce their total cost of ownership. If we regard the effectiveness of maintenance expenditures as “quality”, this is an improvement of the quality and can be considered as a service for the end-users. This can also be an additional selling point for sales teams at machine manufacturers.

Size of the press: Ground height 16.44m (Total height including the pit part is 22m)

Solving a Pressing Issue with Superbolt Tensioners From hydropower generation facilities to bookbinding press, the usability of Superbolt multi-jackbolt tensioners transcends across different types of applications to keep bolted connections firmly together. Les mer
Improving steel mill safety and productivity The JFE Steel Corporation’s West Japan Works is one of the largest and most advanced steel mills in the world. Switching to Superbolt multi-jack tensioners has turned one of the riskiest maintenance tasks in the plant into one of the safest. Les mer
Converting Sea Wave Motion Into Energy With oceans covering more than 70 per cent of the earth’s surface, wave power is potentially a huge untapped source of renewable energy. Les mer
Pressing problem solved with Superbolt Superbolt tensioners secure Sodick's moulding machines allowing to control the force on the joints and guaranteeing optimal performance of the machines. Les mer
Swivel shackle with impressive lifting power The Swivel Shackle Giga DSS from Codipro incorporates a Superbolt tensioner. This is the most efficient lifting ring ever made and can handle turning loads. Les mer
Looking deep into the stars The Large Binocular Telescope (LBT) on Mount Graham in Arizona, USA, is already one of the world’s most advanced optical telescopes. It consists of two 8.4-meter primary mirrors on a common mount s... Les mer
The wind turbine time machine With the sector growing globally every year, the wind energy industry is looking to use less material for producing big wind turbine parts. Les mer