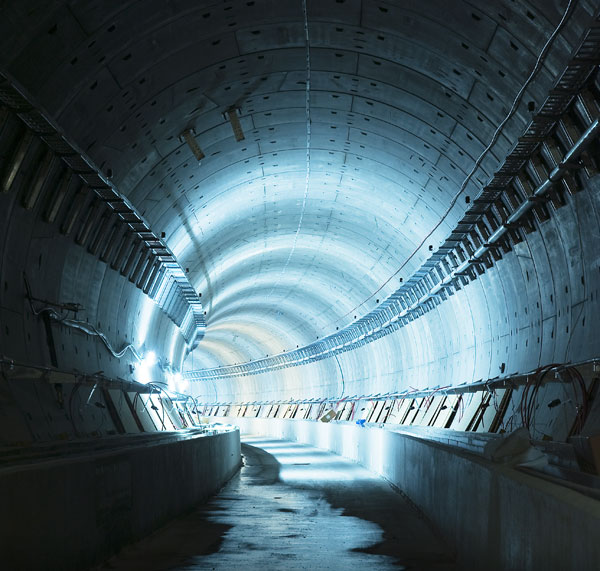 Twenty meters beneath the streets of Malmö, Sweden, the new underground section of the city’s central station is gradually taking shape. Currently cavernous and empty, with music from workmen’s radios echoing off the walls and the smell of concrete dust in the air, it will in December next year be a major transport hub connecting Sweden’s third city with Denmark’s largest, Copenhagen.

Malmö Citytunnel Group, the consortium behind the project, has demanded that the concrete in the tunnel lasts 120 years – as must everything mounted in it, such as the gantry carrying electric cables, water pipes and ventilation pipes that run the length of the 350m-long platform. Contractor NCC, responsible for the underground station and platform, was tasked with finding a solution that would keep the gantry firmly bolted to the tunnel’s roof and able to resist the pressure waves created by trains entering and leaving the station.

The answer was a series of steel rails cast into the concrete of the tunnel roof. Into these rails are secured thousands of anchor bolts manufactured by Halfen-Deha in top-quality A5 steel, each of which is secured with a Nord-Lock washer pair.

“We insert each anchor bolt into the rail, twist it 90 degrees, and then tighten it,” says Jörgen Andersson, site engineer with NCC. “This is supposed to hold for a very long time, so the demands on the bolts and the washers are very high. We are counting on them to do a good job.”

While there is much to be done before the first train pulls in – the Citytunnel is currently six months ahead of schedule – the gantry project is finished. There are 5,000 anchor bolts, painted with white fire-resistant paint, holding the gantry solidly in place in preparation for the buffeting created by the arrival of dozens of trains a day passing through Malmö Central Station along the €1 bn Citytunnel line. At €5 a piece for more than a century of service, the lifecycle cost is minimal.

“We are pleased with the result. No problems at all,” says ­Andersson. “With the Citytunnel it would be very difficult to do repairs or maintenance if something went wrong because it is out of the question to close the tunnel to get access. But they won’t have to worry about this gantry for another 120 years.”

Underground operations Sandvik Mining and Construction was having problems with the bolts clamping the cutting tools to the reaming head; they were sometimes coming loose under the extreme vibrations, loads and torque involved. Replacing the bolts which vibrated loose was a costly, time consuming and often dangerous job. Více informací
Piste perfect Whatever slope a skier can ski down, this vehicle can drive up. Regardless of the angle, the pitch, the bumps and the dips, the extreme cold and driving snow, nothing stands in its way. Více informací
A formula for success A key piece of equipment in any pit stop is the pneumatic impact wrench, or wheel gun, which is relied on to loosen the large nut holding on each wheel and then screw on a new wheel – all in the blink of an eye. Více informací
Built for Speed The latest version of Japan Railway’s famous Shinkansen, known around the world as the Bullet Train, reaches speeds of 300 kilometres per hour. Více informací