Nord-Lock Group Insights A charge from the Alps

A charge from the Alps

Backdropped by the Alps, a Swiss power plant has solved the problem of storing electricity. Using and reusing water that is dropped through a nine kilometre tunnel inside the mountain, the plant functions as a giant battery.

After almost 50 years of reliable service to the Swiss national grid, the 240 MW hydroelectric plant in Veytaux is now doubling its capacity to reach about 1,000 million kWh per year, up from today’s 507 million kWh per year. This is the equivalent of 80 wind turbines – enough electricity to power half a billion refrigerators.

Located on the shores of eastern Lake Geneva, the power station, Forces Motrices Hongrin-Léman, SA, Centrale de Veytaux, is itself a non-descript cinderblock industrial building. But outside the office windows, the local paddle steamer or the occasional sailboat trace ripples across the picturesque lake. Small farmhouses dot the landscape, and cows and mountain goats are out to pasture.

However, inside the mountain and out of sight is a masterpiece of Swiss engineering.

It takes a bird’s eye view to appreciate the big picture. First there is Lake Geneva, or Lac Léman as it is known to the Swiss, a 580 square kilometre Rhône-fed body of fresh water stretching 70 kilometres between Switzerland and France and surrounded by the Alps and the Juras mountain ranges. 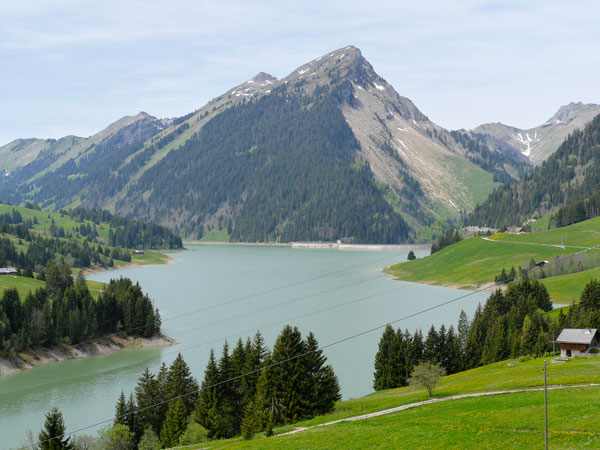 One thousand metres up, to the east, is Le Barrage de l’Hongrin, a man-made and dammed-up reservoir, which is fed by the Hongrin River, other high country tributaries and snowmelt. Snow persists all year round on north-facing peaks. The reservoir drops 32 cubic metres of water per second onto the Veytaux hydroelectric station down below through a vertical and horizontal nine kilometre excavated tunnel big enough for an SUV. The plan is to increase flow to 60 cubic metres per second.

Inside the power plant are four generators, two so-called Pelton wheels, several subterranean house-sized pumps, and assorted cables, pipelines and control rooms; everything neatly aligned and colour-coded – blue for pumps, red for alternators, green for turbines. It is so quiet you could hear a bolt drop.

“We basically function as one big battery in the mountains,” says Fabrice Blanchut, Head of Maintenance at Hydro Exploitation, the company that runs the Veytaux plant on behalf of a Swiss consortium consisting of Romande ­Energie, Alpiq Suisse, Groupe E, and the municipality of Lausanne. “Water is gravity-fed into our generators to produce electricity when the demand and price are highest. When electricity prices go down during the day, we pump water back up to l´Hongrin from Lake Geneva. This charges the batteries, so to speak.”

In technical terms, this pumped storage cycle transfers an amount of electricity from night to day, from hours of cheap unused electricity to hours of high consumption.

The Swiss market, just like the global market for electricity, is a so-called spot market, where prices fluctuate in second increments when there is currently an overcapacity. New, alternative sources, such as wind and solar energy have been added to the electricity grid, pushing prices down.

A hydroelectric power station like the one in Veytaux has a long-term perspective, hence the on-going 331 million Swiss Franc (USD 356 million) work to double its capacity by 2016.

According to Blanchut, plans were drawn up for the expansion over ten years ago under very different market circumstances. “In all honesty,” he now says, “these expansion plans would not have been made today.”

The doubling of the Veytaux plant’s output to 480 MW (60 MW in reserve) utilises the existing nine kilometre-long chute from the reservoir for both pumping Lake Geneva-water up, and letting it run down again.

The main difference is the installation of a massive bifurcation valve, like the plumbing in a household sink, at the bottom of the mountain in Veytaux to redirect the source or direction of the mountain or lake water into a brand new underground pump and generator hall.

As part of massive overhaul of the 50 year old Veytaux hydroelectric plant in 2001, pre- existing coupling bolts were replaced with Superbolt Expansion bolts on the Pelton wheels. In 2010, the first Expansion bolts in stainless steel have been installed.

According to Maintenance Engineers George Rey and Francois Lerch, “With Nord-Lock we know what we are getting.” They list the advantages:

Ecuador's new power Ecuador already meets 45 percent of its energy needs with hydroelectric power, but is aiming to increase this to 93 percent by 2016. Read More
Drill with Skill When it comes to drills, size and horsepower are not everything. In small confined spaces or sensitive environments, it is more important to have equipment that is flexible and can drill with finesse. Read More
Making deep sea drilling safer As the global industry looks for safer deep sea oil drilling solutions, MPO’s gas riser handling systems are in high demand. In just a few years, they’ve grown from a small office into a global supplier with over 200 employees. Read More
The wind turbine time machine With the sector growing globally every year, the wind energy industry is looking to use less material for producing big wind turbine parts. Read More
Converting Sea Wave Motion Into Energy With oceans covering more than 70 per cent of the earth’s surface, wave power is potentially a huge untapped source of renewable energy. Read More