For the second consecutive year, a Nord-Lock sponsored team of engineering students has won first place in the Mexican national final of the Human Powered Vehicle Challenge (HPVC). The winning vehicle, Stingray ITM, now progresses to the next stage of the competition, which will take place in Orlando, USA in 2014.

The Stingray is a 27-speed tricycle specially designed to be used in city streets in low-density traffic. The vehicle’s structure protects the driver, and includes front suspension and an ergonomic adjustable seat. 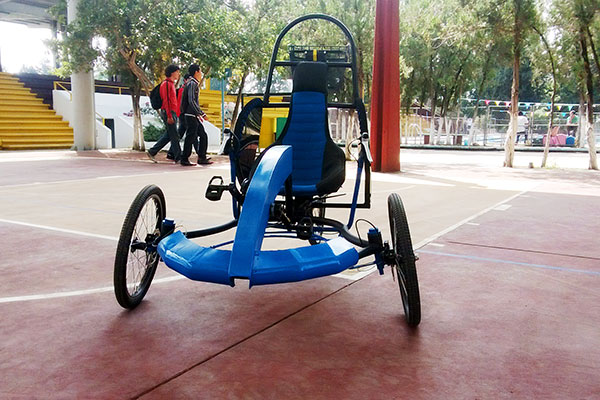 “Stingray’s level of safety is unique since it offers excellent stability, braking and a great turning radius, making it the best human powered vehicle from HPVC Mexico,” says Manuel Pimentel Vega, one of the students involved in the project. “Nord-Lock’s contribution was one of the most important factors as it ensured all bolted joints were secure and that really made a difference compared with the other human powered vehicles.”

The Human Powered Vehicle Challenge is organised by the American Society of Mechanical Engineers (ASME), and is an international engineering competition for university students. The objective is to motivate new generations of engineers to develop low-cost and environmentally-friendly transportation.

Naturally, bolt security was a key area of concern, and a decisive factor in helping Stingray win the HPVC Mexico final, which was held in Mexico City in April 2013. “HPVC is a competition that inspects security systems in a very strict way, which is why our team decided to ensure that all important mechanical systems such as steering, brakes, transmission and suspension systems, were secured with Nord-Lock washers,” adds Pimentel. “In comparison with other vehicles, we didn’t have any mechanical problems or accidents during any of the events.”

In fact, it was the second year in a row that the competition was won by a Nord-Lock sponsored team from the University Technological Institute of Morelia. In 2012, Nord-Lock provided bolt securing components to Tarasco ITM, who finished first in the Mexican final, and second in the Latin American final, which was held in Caracas, Venezuela in February 2013.

Through its involvement in the competition, Nord-Lock hopes to reach out to local university students and future engineers in Mexico, and raise awareness of its products and capabilities. The participating students are all in their last year of studies and expecting to enter the industry within the next 12 months. After their experience in the HPVC competition, it is hoped that they will now have a renewed appreciation of the importance of reliable bolt security, and what Nord-Lock has to offer.

【採用事例】ラジコン飛行機エンジン部（ノルトロック） マレーシアのサラワク北東部にあるミリという沿岸部の町で空を見上げると、ノルトロックワッシャーがラジコン飛行機に乗って空を飛んでいる姿が見られるかも知れません。 詳細
Life in the engineering fast lane Attracting young talent to the manufacturing industry is getting increasingly challenging. So what can companies and academia do to attract young talent? 詳細
Chalmers takes the chequered flag Young engineers from Gothenburg’s Chalmers University of Technology – proudly partnered by Nord-Lock – have won the world’s largest student engineering competition. After ten months of designing, b... 詳細
氷上に乗る 1930年代にスウェーデンで考案された氷上レースは、他のどんなものとも違うモータースポーツです。28mmスパイクが付いたタイヤを装備し、レーサーは3秒以内に、ゼロから時速100kmまで加速します。 詳細
In the fast lane to greener motoring If the job you want to do doesn’t exist, then invent it. That’s what Gordon Foat did to combine his two passions: motor cars and safeguarding the environment. 詳細